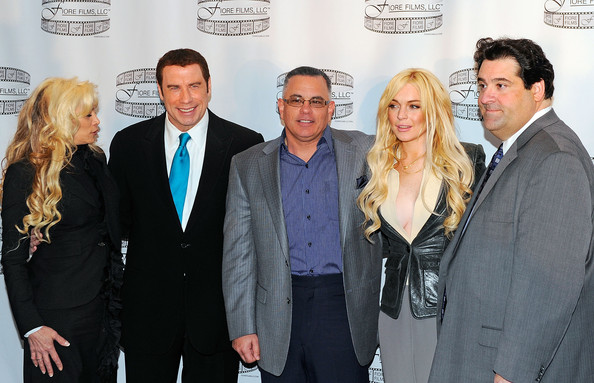 Today marks the unofficial one year anniversary of the announcement of a mob movie called “Gotti: In the Shadow of My Father.” The movie is still not made, but a start date is set for late January 2012. Maybe.

What you may not know: The man behind the still not filmed “Gotti,” starring John Travolta and wife Kelly Preston is a former federal felon who did time in the Allenwood State Penitentiary and has strong mob connections.

Mark Fiore, who announced the “Gotti” movie one year ago but still hasn’t actually made it, is also known as Marco Fiore, Jr.

In the late 90s Marco Fiore and three other defendants were successfully prosecuted by the SEC for defrauding investors in a “boiler room” scheme. Fiore pled guilty to one count of securities fraud and one count of conspiracy to commit securities fraud, wire fraud, and commercial bribery.

In 2002, Marco Fiore received a 51 month sentence, followed by three years’ probation. He was ordered to pay $10,773,461 restitution with one other defendant, Benjamin Salmonese, who’d been involved in a nearly simultaneous drug bust, to the people they defrauded. http://articles.nydailynews.com/2001-05-23/news/18170869_1_drug-ring-bulletproof-vests-loansharking

Fiore has been telling the people he’s hired for “Gotti” that he did go to jail, that it was no big deal. “He said he took the fall for someone who the government really wanted,” says a source.

Actually, the government really wanted him. The case was  documented in a riveting 2003 book by Gary Weiss called “Born to Steal: When the Mafia Hit Wall Street.” That book should actually be made into a mini series, it’s so wild. http://www.amazon.com/Born-Steal-When-Mafia-Street/dp/0446528579

Weiss writes on his website: “Sure, an ex-con has a right to make a living. But the problem is that Fiore has not come clean about his past. He says that his background was in “mergers and acquisitions.” Actually the only “mergers” were the mergers of other people’s money with his wallet.”

Weiss recounts in the book how Fiore and his buddies — all of them with serious ties to the mob, plus Salmonese who was a known drug trafficker– were convicted of securities fraud. The  firm they deliberately looted was called Nationwide, from Fort Worth, Texas. Even though Fiore has told new associates that he went to jail for very little, he was, in fact, the guys the Feds most wanted in the Nationwide scam. He’s prevented from working in the securities business again. http://www.sec.gov/litigation/admin/34-48905.htm

In June 2011, when the “Gotti” project heated up with a new director, Barry Levinson, and screenwriter, James Toback, Weiss appeared in a brief segment on “Inside Edition.”  He reiterated a few facts from his book. But “IE” told only part of the story. By then, “Gotti”–based on the life of John Gotti, Jr., who’s in business with Fiore–had already been a publicity project for nine months. John Travolta and his wife Kelly Preston had signed on to play lead roles, with Nick Cassavetes as director. Then Cassavetes dropped out without explanation. Levinson came in, and brought Toback and actor Al Pacino. There were constant stories about Lindsay Lohan playing Victoria Gotti. Joe Pesci sued the production, saying he’d had a signed contract that was breached.

The story of “Gotti” sounds a like a real life version of another Travolta movie, “Get Shorty.” Fiore lists on his resume a job at Dolnik Management–a New Jersey real estate developer. With the Dolniks, Fiore has one movie credit– a cheap and unwatchable comedy that carried the “National Lampoon” logo and may have cost around $500,000. Fiore has announced another film, “Wall Street Mob” aka “Mob Street,” written by actor Chazz Palminteri. But so far nothing has happened on it. Palminteri was recently announced to play the part Pesci is suing over.

According to Weiss, Fiore has mob ties in addition to his friendship with John Gotti Jr. When he was conducting his “Boiler Room” activities in the mid 90s, his best friend was the son of an extremely serious gangster. Frank Coppa Jr.’s father, Frank Coppa Sr., was a heavy player in the Bonnano crime family until becoming an informant. He’s currently in the Federal Witness Protection Program. (http://www.newcriminologist.com/article.asp?nid=716)

His son, Frank Jr., Fiore’s close pal  for years, was described in court testimony by a mob informant as a “soldier” in the Bonnano family. These are not the Sopranos, but the Corleones. They mean business.

Fiore’s brother, Thomas “Nino” Fiore, is listed on the imdb.com as a producer on “Gotti.” His bio also has a lack of movie experience. “Mr. Fiore is currently owner/founder of Productions Management LLC. and Exotic Auto leasing and picture car company. Owner /managing agent for New York City leased housing division. Pyro technical injury, automobile snow mobile atv stunt accident, Thomas has been through the trenches and still swims and steams on a weekly basis.”

Steve Honig, the p.r. rep for Fiore, who also reps Lindsay Lohan, told me: “We decline to comment for this story.” Levinson also declined comment through his own pr rep.

Meantime, on Fiore’s website, www.fiorefilmsllc.com, you can see the bizarre press conference where Travolta defends the Gotti family, and calls their patriarch — vicious killer and convicted criminal–basically misunderstood but hard working and very focused. It’s hilarious. In the background, Madonna sings “Everyone wants to go to Hollywood…”