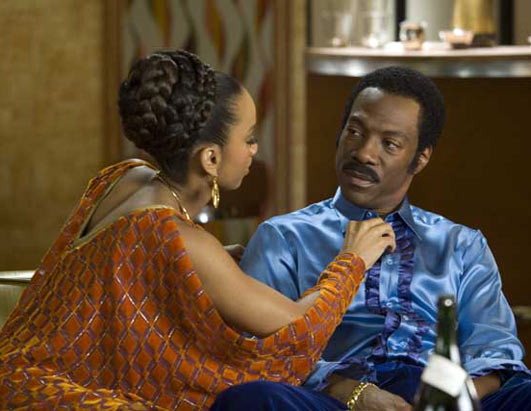 Lots of rumors today that Eddie Murphy is being considered to host the 2012 Academy Awards. It makes sense. He’s very funny and a movie star even though most of his recent movies have been embarrassing bombs. His next one, “Tower Heist,” looks like it will be a hit. And the director of it, Brett Ratner, is the guest producer for this year’s Oscars.

But the Academy may have a long memory. When Eddie, who was up for Best Supporting Actor in “Dreamgirls,” lost to Alan Arkin (“Little Miss Sunshine”) in 2007, the comedian immediately got up and left the Kodak Theater.

Yes, it’s hard to lose an Oscar and look happy for the winner. But that’s good sportsmanship, isn’t it? I was sitting in the back row of the first section of the Kodak when all of a sudden Murphy, with a huge entourage including then girlfriend Tracey Edmonds, marched out. I’m pretty sure it was a first in Oscar history. So called “losers” will often hit the lobby bar and roam around, but they never actually exit the proceedings. Murphy was mad that he didn’t win, and wasn’t going to stick around if no one appreciated him.

Of course, Ratner will know how to work with Murphy to keep him in line, and they could produce a funny, funny show. Pairing him with Billy Crystal would be the best idea, as Crystal has the experience and temperament. And if Murphy leaves halfway through the show, at least Crystal will still be on hand.