This is a guilty pleasure item. Todd Rundgren is hosting a Survival Summer Camp up in Woodstock, New York June 20-24. www.toddstore.com/trsurivalcamp. It’s sort of a nod to David Fishof’s Rock and Roll Fantasy Camps.

Todd’s 1973 album, “A Wizard, A True Star,” remains a personal favorite. I don’t know why Todd isn’t in the Rock and Roll Hall of Fame. (Well, maybe I do. They’re idiots.) Anyway: now journalist and fan Paul Myers, who happens to be the brother of Mike Myers, has published a book called “A Wizard A True Star: Todd Rundgren In The Studio.” When the book was published during the late winter, fellow Canadian Dave Foley hosted a party for Myers at the indie Club Largo in Los Angeles. Aimee Mann, who shares a Beatle fixation with Todd, performed with her producer Jon Brion.

Paul Myers is Mike’s older, very talented, author/musician brother.  He is San Francisco based; his band is called ‘The Paul and John’ with his songwriter partner John Moremen. Our Leah Sydney spoke to Myers about the book and about Todd.

“I was a musician and a producer and became a writer later,” Myers told her. “I always wanted to write about things that affected me as a musician. Todd not only has produced his own amazing albums, but he produced all these other albums for the New York Dolls,  XTZ, Meatloaf’s Bat Out Of Hell, Cheap Trick and more. No one had been writing about him.  It’s a running commentary from all these people and Todd talking about his work. 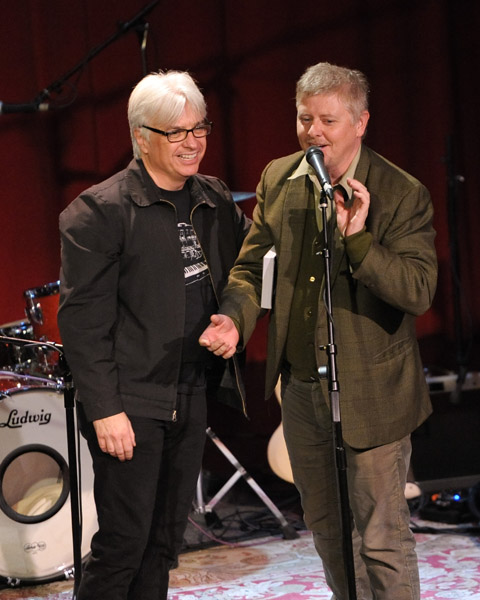 What does he feel about Todd not being in the Rock and Roll Hall of Fame?

“It’s a travesty that he’s not in the Rock and Roll  Hall of Fame.  He’s done more work that has been platinum and innovative in rock and roll.  He produced “We’re An American Band’ by Grand Funk Railroad-that is a reason he should be in the Hall of Fame.   Meatloaf’s ‘Bat of a Hell ‘Todd produced-that’s a reason there.  Also his own albums ‘Something Anything, Runt. Permanent Mink Hollow. ‘    Every musician I ever talk to says ‘Oh My God I love Todd Rundgren.”  There is so much love for him, I can’t believe no one has talked about him yet, let alone he’s not in the Hall Of Fame. It’s a travesty.”

What about his brother Mike?

“I’m a little older than Mike,    I let my hair go prematurely white-when I was 19 it was salt and pepper-then all salt.       My wife likes it  because my eyebrows haven’t gone white so I don’t look like Colonel Sanders yet.  The first time I met Todd was through Mike at an Saturday Night Live party. One of the  cool thing about Mike being famous is that I’ve gotten to meet a lot of my musical heroes.  We also have an older brother Peter-who’s a music fan and him and Mike’s are huge Todd fans like me.”

“Todd is playing on the east coast- his albums ‘Healing’ and  an album called ‘Todd-’he’s playing them in his entirety on the east coast.  He’s huge across the country.  He plays the whole album from beginning to end.  Fans that go to his shows can get my book, he loves the book.  So it’s all so cool.’

You can order this book on Amazon. And if you don’t have “A Wizard, A True Star” or Todd’s prior album, “Something/Anything,” you’re missing the best, most inventive pop rock ever. I could listen to “I Saw the Light” over and over. It’s a perfect record. Also, Rundgren has produced dozens of albums for other artists. My favorites: XTC‘s “Skylarking” and Badfinger‘s seminal “Straight Up.”