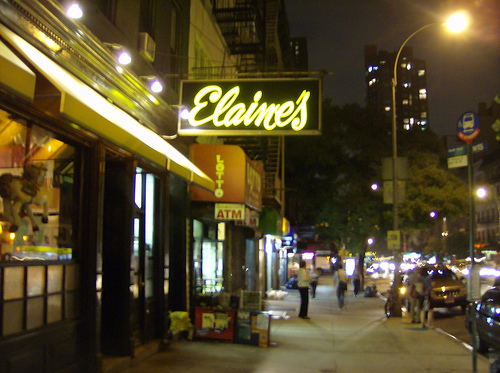 The final night of Elaine’s ended at 4:20am Friday morning with the clanking down of metal gates and the last patrons out on the sidewalk, in the dark. It was a crazy night, though, that had started around 6pm Thursday. For hours–and I mean, hours, until 1am–a long line of people who wanted to get a drink at the famous bar queued up along Second Avenue. Most of them were not let in.

Photographers and film crews set up on the sidewalk. Occasionally, stranded guests or old-timers had to be fished from the crowd by someone inside who knew them. One of those people was Mary Jane Lardner, Elaine Kaufman‘s original partner in 1962, and the niece of the famed writer Ring Lardner, Jr. She and her now ex husband Donald Ward put up $5000 in 1962, matching Elaine’s contribution. They started the restaurant hoping writers would be their customers. Then, as it happens with writers, they had to float them for months at a time on tabs.

The crowd inside Elaine’s grew perilously close. For hours there was gridlock in the narrow front room, with patrons jammed into seats. Luckily, former police commissioner Bill Bratton (with his broadcaster wife Rikki Klieman) and retired fire marshall Louis Garcia were on hand–although they didn’t dare move in any direction. Incongruously, Alec Baldwin--sporting a white beard–and “Preppy Handbook” author Lisa Birnbach snaked through the crowd with equipment from National Public Radio, interviewing customers.

I don’t know how many they got to, but in the crowd over the many hours were lots of well known faces. including Sirio Maccioni, the 79 year old owner of Le Cirque, who came uptown when his place closed to pay his respects, accompanied by his son, Mauro; and: famed photographers like Harry Benson and Jonathan Becker, novelist Stuart Woods, socialite Daphne Guinness, actor Michael Murphy–who starred in Woody Allen‘s classic, “Manhattan,” shot right there in the restaurant in 1977. Carl Bernstein ate in the side room, where Gay Talese was entertaining a crowd from the New York Times put together by Metro editor Pete Khoury. The writer Bruce Jay Friedman, also at that table, exclaimed that he’s never eaten in the side room–aka Siberia–in 47 years. Dr. Ruth Westheimer, the sex expert, dined with Josh Gaspero, her old publisher. Kathryn Altman, widow of director Robert and Elaine’s great pal, had her own table, as did James Lipton of “Inside the Actors Studio.” Caroline Hirsch and Andrew Fox, of Caroline’s Comedy Club, chowed down with actress Missy Hargreaves, whose husband, Jeff Ross, produces Conan O’Brien’s TV show.

There were toasts–from Father Pete Colapietro, from Pete Khoury, from yours truly, and from headwaiter Gianni Adamo. Famed photographer Jessica Burstein snapped away, and made a short toast to all the women of Elaine’s.

Who was missing? Why, only Elaine herself, who would have loved this crowd, the excitement, the waiters carrying meals five at a time on one arm, magically, defying physics and gravity through a throng, a scrum, that also featured former New York Governor David Paterson, one time Deputy Mayor Sid Davidoff and his New York Post writer wife Linda Stasi, writers Fred Morton and Charles Kipps, David Fisher and David Black,  producers Fred Rappaport and Judy Gordon, pr man Gary Springer, who grew up at Elaine’s with his late dad, John, the famed press agent, and five time Tony nominated choreographer Pat Birch.

Was this the end? Yes. Despite rumors of a re-opening in nine months, or some other restaurant taking the space, Elaine’s is done. The end came with a cast of characters and subplots that would have made a great Robert Altman movie. But in the end, Elaine is gone. And without her, no matter how you figure the odds, it was near impossible to keep Elaine’s going. More will be written in the future. But for now, we just celebrate this amazing woman who connected all of our lives.