Tomorrow comes Aretha Franklin‘s long promised “A Woman Falling out of Love,” on her very own Aretha’s Records. It’s available for now at Wal Mart and on WalMart.com. After a month it goes to the downloading services like ITunes and amazon.com. It’s Aretha’s first new album in a long time, and her 38th all together. Unlike her glossy releases on Arista over the last 25 years, “A Woman Falling out Love” takes Ms. Franklin  very back to the roots Aretha–lots gospel, her own songs, Aretha playing brilliant piano, and in house production by her own team. If there’s a hit single, I’d say it’s a tie between her own composition, “This You Should Know,” and Norman West‘s “Put It Back Together Again.” There’s also a potential hit in “U Can’t See Me,” written and produced by Curtis Boone. This is unvarnished Aretha, and a relief to know that the Queen of Soul still reigns supreme! Don’t miss gospel highlights: “Faithful,” with Karen Clark, and “His Eye Is on the Sparrow,” featuring Franklin’s son, Eddie. 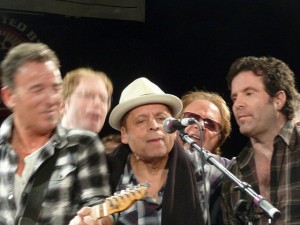 and down career. His first album in eons, “The King of Inbetween,” will be available beginning June 7th. Right now the single “Coney Island Winter” is on ITunes. The video is in our player below. At Saturday night’s show, Garland kicked ass with some of his great hits like “Wild in the Streets” and “96 Tears,” fan favorites like “New York Skyline” and “I May Not Be Your Kind.” But it’s the new songs I’m interested in: Jeffreys has always been the king of in-between–not just black and white, but rock and soul. For 35 years he’s been a radio enigma. (You know radio hates the gray areas.) But outside of Paul Simon’s current album, there is nothing this smart, fun, or catchy for people who really love rock and roll music. www.garlandjeffreys.com