So much to catch up on from Oscar weekend besides the actual Oscars. Our Leah Sydney reports that the Women in Film event, held on rain drenched Friday night at SoHo House, scared up Amy Adams, Melissa Leo, Jackie Weaver, Hailee Steinfeld and David O. Russell. Halle Berry was honored; producer Cathy Shulman, president of Women in Film, spoke to Leah.

“We are still dealing with the situation of that of the top 100 films annually I think now four years running  we’ve only got about 7 % of women at best, working in the roles of writers, directors and producers and less in other areas. It remains a problem.  Since 1998 we haven’t increased the numbers, we’ve actually decreased them.I think the best way to solve it is to train and instruct women as they’re coming into the media business as to survival skills in the business. And also to really work to educate them that this is not just show, this is show business.  There is a very solid business aspect to the jobs.  It’s important to understand the context of how the movies  are working and how they sell, etc. “ 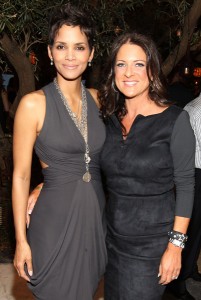 “I see more proliferation actually in the executive ranks of women.  I wouldn’t say in the executive side  that’s it’s only it is a good old boys network. What’s really shocking even with executives in high level  positions within the studios, we’re  not seeing an increase an increase of the hiring of women from the creative side.  I would like to see a more concerted, focused effort  in hiring women into jobs. Only if the women are prepared and ready and appropriate for those jobs. The way we can focus on making women ready is to teach them to the necessary skills.  To work on the kind of genres that work in the business. To steer away from a tendency to work on personal and particular stories  which often times don’t have a wide distribution. It’s hard. If you’re making a movie of an experience that only happens rarely-it’s harder..If it’s a four  quadrant movie,  a universal theme, people all over the world can relate to it.”

Halle then told the crowd, “ I love women, I love supporting them, I do whatever I can to be a part of it.”  She didn’t talk to the press otherwise, but after all, she’s got a baby at home.