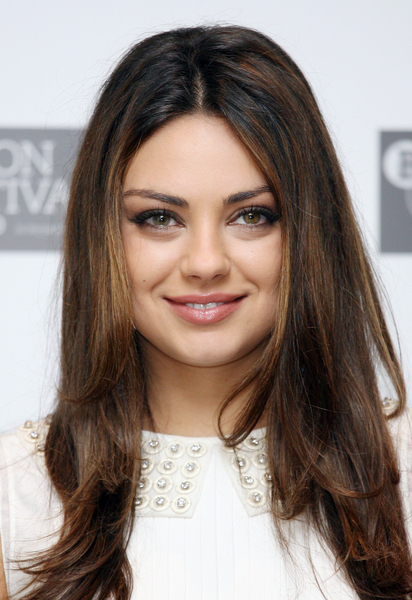 Aronofsky and Natalie Portman are old pro’s at this sort of thing. Not so Mila Kunis, who’s made the jump from TV fame on “That 70s Show” to the Oscar race with a standout performance in “Black Swan.” She’s a ballet dancer who may or may not exist, and may or may not be a friend of Portman’s character.

On the red carpet at Monday night’s Gotham Awards, Kunis looked, well, frightened. She came into 55 Wall Street with her eyes crossed. She was also exhausted. Last night, at the movie’s premiere, she cut her red carpet appearance short.

Later, at the swanky party at the St. Regis Hotel following the Ziegfeld Theater screening, Mila arrived after a costume change. She was a little calmer. “I’ve done like 50 Q&A’s since Toronto,” she told me. Luckily, last night she had the help of good friend Emmanuelle Chriqui, of “Entourage” fame, to guide her along.

I think Mila’s going to do fine, but what happens if she gets some award action? Yesterday “Black Swan” picked up some Indie Spirit nominations including Best Feature, Director, and Actress. It’s all starting.

Remember the great Spanish actor (with a French name) Jean Reno from “Mission Impossible”? He starred with Natalie Portman when she was 11 in “The Professional.” That was sixteen years ago! “I always knew she would be a star,” Reno said suavely at dinner. And, he was right!

So this is what I think of Mila Kunis, who is 27, was born in the Ukraine, is Jewish and was raised in Los Angeles. She’s on her way. Once audiences see “Black Swan,” all thoughts of the “70s Show” will be erased.