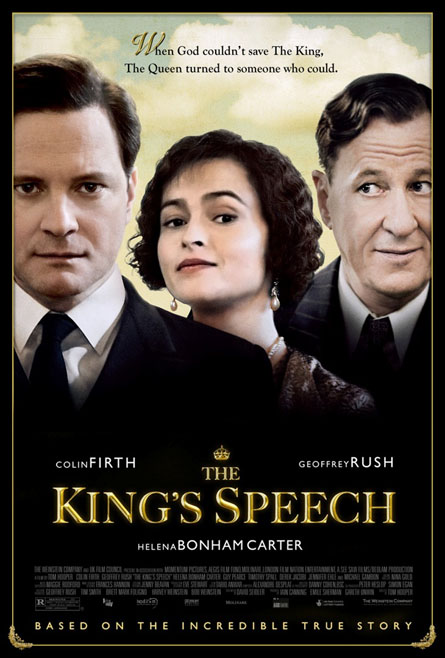 You’ve heard a lot about it, so I don’t want to overhype what is just a really good movie. But at a time when movies are not what they used to be, “The King’s Speech” recalls all the great things that used to make us love a Hollywood film.

And it’s been a good year, too. We’ve had “127 Hours,” “The Social Network,” “Let Me In,” “Toy Story 3,” “Inception,” “The Town,” “Tamara Drewe” (which I adored), “Get Low,” “The Kids Are All Right,” “Please Give” (another sleeper), “Shutter Island,” “The Ghost Writer,” “Made in Dagenham,” and so on. I even loved the less-seen “Greenberg,” from Noah Baumbach. (Original screenplay nominee?) Still to come: “Black Swan” and “The Fighter,” each sensational, and two question marks–“True Grit” from the Coen Brothers and “How Do You Know?” from James L. Brooks.

And still, with all of that said, “The King’s Speech” is the standout. I remember when Colin Firth was screening “A Single Man” in Toronto, September 2009. He and Geoffrey Rush were talking about making a movie about King George VI, who stuttered, and his speech therapist. Tom Hooper was going to direct. “Sounds good,” I thought, not really thinking about it all.

A year later, it’s quite amazing to see what work went into this drama. On top of that, Helena Bonham Carter–currently looking witchy and acting happily insane in “Harry Potter 7.1”–does maybe the best turn of her career non Tim Burton as the Queen Mum. She gives this woman we only knew as an old, old lady life as a young–middle aged?–person who was quite forthright and purposeful. Queen Elizabeth didn’t just raise herself. HBC just shimmers.

Of course, it’s the guys’ movie. The best Oscar clip for Firth is one that can’t be shown on TV. It’s toward the end, when Bertie (nickname of the King), is practicing the speech that will plunge Britain into World War II. It’s a serious of “f bombs,” delivered with hilarity and sweetness. Just brilliant.

Rush– who has an Oscar (Firth doesn’t) makes everything seem easy. He is so accomplished that it’s all become sleight of hand. It’s really a wonder that “Shine” plucked him from the crowd in 1996. As Lionel Logue, the failed actor turned speech teacher, Rush pulls the movie forward, careful never to get in Firth’s way. He just guides him in for a landing as Bertie proceeds from insecure prince to King. Their scene together–in which Bertie tells his family story while gluing together model planes–is for the ages.

David Edelstein complained in New York magazine this week about some of director Hooper’s camera work. But I think Hooper’s done a terribly original job of staging this piece. After the multi part “John Adams” and “Elizabeth I” for HBO, Hooper knows how to give edginess to historical information. In a year when Danny Boyle is swooping in and around a canyon over a fixed subject, and David Fincher has reinvented the saga of moguls-in-the-making, Hooper surprises us all by making edge of the seat drama from what could have seemed stuffy and dusty.