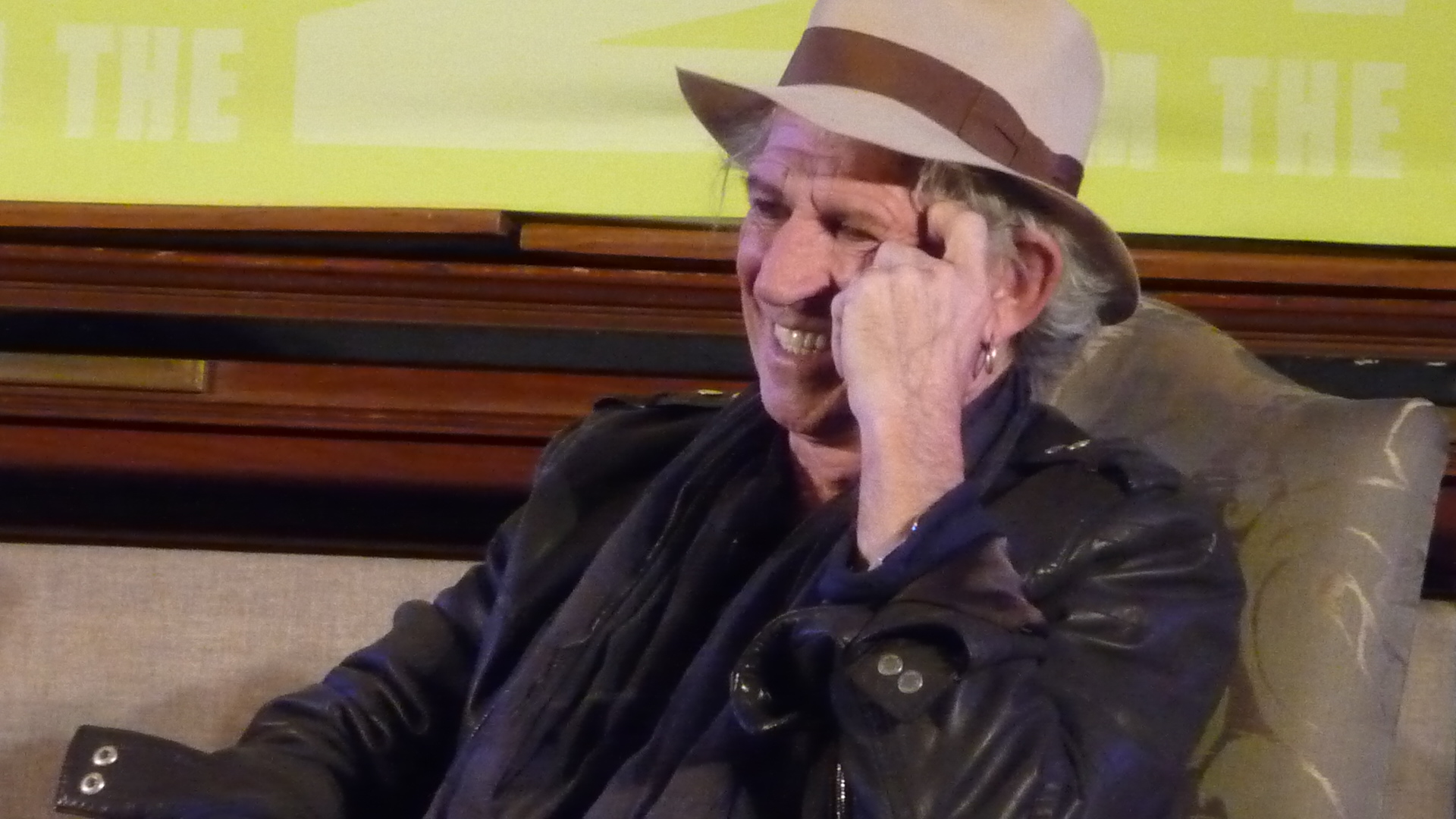 It was about time one of the Rolling Stones came to the library.

Last night it was Keith Richards‘ turn, and he didn’t take out any books. But he allowed himself to be interviewed for about an hour and twenty minutes in the magnificent Celeste Bartos Forum of the New York Public Library. In front of a few hundred lucky souls, Keith answered questions gently–but precisely–presented to him by rock journalist Anthony DeCurtis.

But mostly it was the public, who’d paid to get in. There was a long line going east on 42nd St. from the side entrance of the library, with hopefuls holding signs to get in. The event, we were told, sold out in 42 seconds.

Richards did not disappoint. There to promote his bestselling memoir, “Life,” Keith appeared about 20 minutes late. Forty minutes into the interview he got up and took a two minute bathroom break. But otherwise, he was on point, as they say. He didn’t avoid any of DeCurtis’s questions, although he was more reticent in person about discussing his romantic history than in the book.

“It’s very futile to say anything bad about women,” Keith told DeCurtis, and got a knowing laugh from the audience. He added: “I love them dearly.”

He also didn’t want to say much about his notorious and legendary relationship with drugs. “I haven’t been a junkie for 30 years,” he said. “Drugs seep into your life. You’re not aware of it at first. Getting in is easy. Getting out is difficult. I could give you a lecture all night about…quality [of drugs]. Anyway, all my news is out of date.”

Richards was more open about songwriting and how he’s dealt with Mick Jagger all these years. On the Stones’ classic fertile stretch from about 1967 to 1973, he said: “It seemed very easy. Songs were just popping out.”

He met Jagger in a rail station. Mick was carrying records under his arm by Muddy Waters and Chuck Berry. “I probably wanted to steal them,” Keith laughed. As his partner for over forty years, Richards says: “from my point of view, I’m covering Mick’s ass. I have to make sure he’s supported and confident, whatever he does. I’m like a safety net.”

As for the actual songs, many of which Richards wrote first and then Jagger elaborated on or added lyrics: “They’re tailor made for Mick, although I’m not that good a tailor.”

Richards has four children from two different women–Hansen, to whom he’s been married for almost 27 years and with since 1979; and girlfriend Anita Pallenberg. When DeCurtis asked him about parenting, Keith lit up. “Wife, family kids. Nothing can come between them.”

He paused, and maybe the Rolling Stones, who’ve also been his life, came to mind. “What is a family?” he asked rhetorically. “It sticks together.”