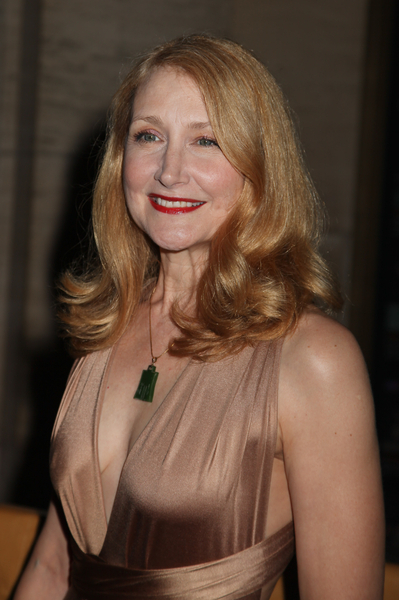 Really: dozens and dozens of people huddled under umbrellas on the plaza outside the Metropolitan Opera House last night to watch the Met’s new production of Wagner’s “Das Rheingold” on a large screen. It was raining off and on like crazy but it didn’t matter. Whatever you think of the new productions under Peter Gelb, they’re getting attention.

Inside, there were plenty of stars in the audience. Regis and Joy Philbin, Anjelica Huston accompanied by old friend Earl McGrath, Patricia Clarkson, Kerry Washington, Christine Baranski, Miranda Richardson, Broadway star from London Mark Rylance, and so on. I didn’t see Meg Ryan but apparently she was there; in her pictures, she looks like someone else. So does Holly Hunter. Charlie Rose saw the opera but skipped the lavish dinner in the massive tent set up next door. Patti Smith–yes, the Patti Smith–one of our heroes–loves opera. She was there.

Oscar nominee Vera Farmiga–so good in “Up in the Air” and “The Departed”–is eight months pregnant but that didn’t stop her. She and her husband, producer Ren Hawkey, are expecting their second child. They’ve also just finished making a movie that Vera directed called “Higher Ground.” It stars Bill Irwin, Donna Murphy and John Hawkes, and should be ready, I guess, for spring film festivals.

This is what happens at the Met dinner: the stars of the opera do finally walk in, and receive thunderous applause from the black-tie dressed diners. Then, as they make their way through the room, the singers pass the movie stars. And then all hell breaks loose. The opera stars don’t get much chance to meet the movie stars.

Patty Clarkson and Kerry Washington each said, simultaneously: “I wonder if Bryn Terfel is married.” He plays the lead, Wotan. Stephanie Blythe, who plays Fricka, immediately invited Patty and Kerry to her one woman show at Carengie Hall next month.

PS Both Clarkson and Washington may be in the Oscar race this winter. Clarkson is a hot topic in “Cairo Time” for Best Actress–best reviews of any lead actress this year so far. And Washington is co-starring in “For Colored Girls.”