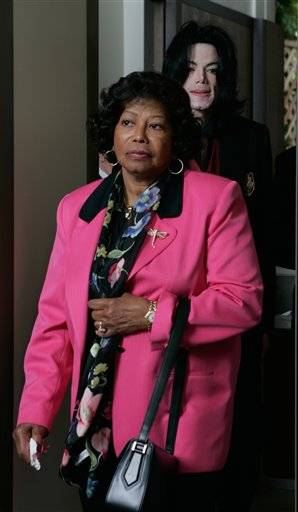 Michael Jackson‘s devoted mother, Katherine Jackson, will publish a book next week about her son.

The self published coffee table book–consisting of personal photographs–is called “Never Can Say Goodbye: The Katherine Jackson Archives.” The book will be sold through a website called www.jacksonsecretvault.com.

“She’s very proud of the book,” says a source. “It’s not being done for money, either.” This much seems true, as such a book could have fetched a big advance. But “Never Can Say Goodbye” is being self-published. Its content is a picture page facing a page of reminiscences by Michael’s mom.

To promote the book, yesterday Katherine gave a two hour interview to Marc Schaffel, Jackson’s former business partner and confidante. For Schaffel, this was the Michael Jackson trifecta. He’s the only person who has done authorized video interviews with Michael Jackson, Debbie Rowe, and now Katherine.

On the eve of the one year anniversary of Michael Jackson’s death, Katherine was driven to Schaffel’s home, where they conducted the interview. They talked about what the last year has been like, the children,memories of Michael over the years. She did not talk about husband Joe Jackson directly, but she did say that she was concerned that the media twisted what the family said.

Katherine talked about the child molestation charges against Michael over the years. She told Schaffel she felt people were out to get Michael. She said that in the 1993 case she felt the boy’s father and stepfather put him up to it. Katherine says she thought the boy–Jordan Chandler–whom she doesn’t name–wanted to recant his story last summer, especially after his father, Evan Chandler, committed suicide.