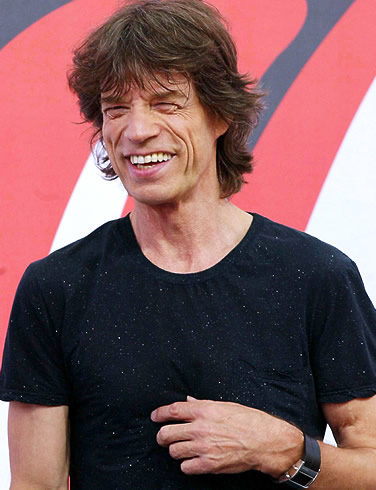 Last night, Mick Jagger went out on a limb, so to speak, for girlfriend L’Wren Scott.

Jagger made a rare appearance at a rooftop benefit (atop the Scholastic Books building) in Soho to help raise money for Haitians who’ve lost limbs in the January earthquake. Scott is old friends with crusading doctor, David Colbert, who’s a dermatologist to the stars. His group is called NYDG Foundation: Rx Haiti. http://www.youtube.com/watch?v=S8SM7aYqqIE

And the stars who did show up included Rachel Weisz and Naomi Watts. It was hoped that Jude Law and Sienna Miller might materialize, but excuses were made: Jude was on a plane back to England.

And what of Mick, besides graciously digging in for Haiti? He’s on his way to Cannes for the re-release of “Exile on Main Street” and the showing of a new short documentary that stitches together pieces of unseen footage from Rolling Stones tapes including the legendary “Cocksucker Blues.”

Six held-back songs were added to the new “Exile.” Mick told me his favorites are “Plundered My Love” — a “Tumbling Dice” companion– and the bluesy, gospelish “I’m Not Signifying.” The other new old tracks include “Pass the Wine (Sophia Loren),” “Dancing in the Light,” “So Divine (Aladdin Story),” and the sublime “Following the River.”

Mick told me, “The songs just were never finished.” The released Exile had 18 tracks spread over 2 LPs. “It took me a long time to finish them,” he said with a wide grin.

It was well worth it. Word is that the party for “Exile” will be on Paul Allen’s yacht. Allen, bravely recovering from cancer treatment, is expected. Maybe Mick will play with Allen’s band. Someone might get some satisfaction after all.