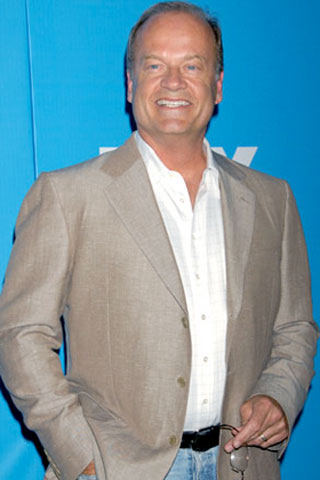 Kelsey Grammer may be a noted Republican conservative on some issues, but he’s certainly not afraid of transvestites or homosexuals. He opened last night as Georges, the “plain old homosexual” whose life partner is Albin, the most famous homosexual drag queen in the country in the very good revival of “La Cage Aux Folles.”

Grammer, who will always be known as Dr. Frasier Crane, is spot on as George, and British actor Douglas Hodge is a wonderful surprise as Albin. This is a new stripped down “La Cage,” unplugged at the smallish Longacre Theater from its original showings at the Palace Theater. You wonder before the curtain goes up how they’re going to fit this show into this tiny stage. But it works: the new “La Cage” seems very much at home here.

Kelsey has his admirers, starting with wife Camille who was trailed into opening night by cameras from “The Real Housewives of Beverly Hills.” I’ve never seen a camera crew inside a Broadway house before the show starts, but the crew wanted to record every bit of Camille’s reactions. Two more BH housewives sat in my row, and I have to say, they looked about as fake as the “women” on the stage. They certainly contained more plastic. One of them fiddled with her Blackberry through the show. I’m not sure if they’d ever been to the theater before. There was no shopping involved.

It didn’t matter. When the show ended, Jerry Herman–the 78 year old master songwriter–was brought on stage to huzzahs and cheers. He wrote “:A Cage” and “Hello, Dolly!” as well as “Mame” and “Mack and Mabel.”No word on why Harvey Fierstein, who wrote “La Cage” with Herman, wasn’t in attendance. But Harvey Weinstein was, happy with his latest theater investment. (No word yet on the progress of talks with Disney despite fevered reports elsewhere.)

Here’s the big news: Kelsey will switch roles at the end of six months. He will play Albin. Georges will then be played either by Hodge, if he stays, or someone else. There’s talk that David Hyde Pierce, Grammer’s TV brother Niles, will step in. That will depend on whether Pierce is then in a production of “La Bete.” Pierce was there last night to cheer Grammer on, along with Kelsey’s actress daughter Spencer, Grammer, Jason Biggs, Tommy Tune, and a smattering of Broadway loyalists.

One quick word on character actor Fred Applegate: he’s sensational. Whoever’s casting “How to Succeed” should pin him down immediately.

The original musicals are “American Idiot,” “Memphis,” “Million Dollar Quartet,” “Everyday Rapture,” “The Addams Family,”and “Fela.” The latter is a bust–no effort has been made to promote it or endear the press to it. So scratch that. “Addams” got the worst reviews in history. That leaves the first four to vie for Best Musical.

More about the revivals tomorrow. And where are the special awards for Carrie Fisher? Her “Wishful Drinking” was a masterpiece. Let’s see the love, all you critics groups!