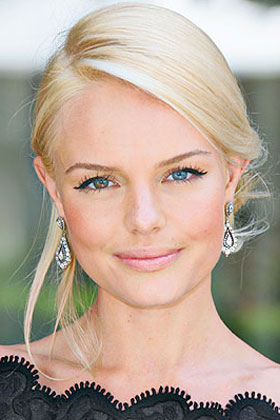 Two-time Oscar winner Jane Fonda finally met Kate Bosworth last night. And she proclaimed, “I want her to do the ‘Barbarella’ sequel!”

And that’s what Vanity Fair’s big Oscar party is always like: It’s like the whole industry is stuffed into one place. People meet and make deals or have romances.

Jane’s beau, famed record producer Richard Perry, fell into conversation with Jennifer Lopez.’ Her whole recording career could be changed if Perry produces some tracks for her.

That’s how it goes. Folks dine on delicious In ‘N’ Out burgers and sliders and pigs in the blanket. Nearly every nominee was in the house, from Gabby Sidibe to winning director Kathryn Bigelow. The latter was in a daze, sitting on a couch with her gold statue while “Hurt Locker” actors Jeremy Renner, Anthony Mackie, and Brian Geraghty fell in for pictures. There were lots of flashbulbs popping. Someone must have’gotten a very cool picture of Carey Mulligan kneeling before Bigelow, with Renner sort of bent over, listening to them.

Hilary Swank came by, just looking’swell in a gown, and made a comic face for me–puffed up cheeks, eyes popping. It’s our secret handshake.

Starz Channel’s Chris Albrecht kibbitzed on the’patio stairs with Ben Silverman, who wore’what looked like a possibly’flammable, very shiny silver jacket. Michael Barker from Sony Pictures Classics kvelled over Mulligan and his usual win for best foreign-language picture — Argentina’s’”The Secret in Their Eyes.” Christoph Waltz was beaming over his win, and showed off his Oscar. So did Mark Boal, who wrote “The Hurt Locker.” Anthony Mackie shlepped it around for a bit.

Near the party’s entrance — it was hard to move! — Sandy Bullock and husband Jesse James met Jane Fonda. Fonda introduced everyone to Tyler Perry, whom she knows from Atlanta. And someone in the crowd realized that Jane would be perfect for the film version of “August Osage County.”

The VF shindig also had Olympic medalists like Apolo Ohno, and Serena Williams, Shaun White, and Ryan Lysacek. But VF gets the gold medal in parties!