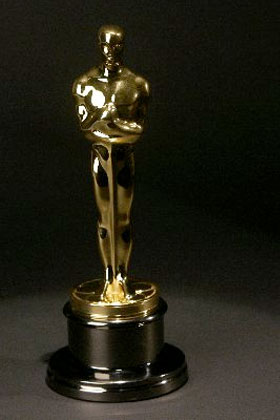 You’d think with 10 best picture nominees, you’d see somebody from one of the films on the first night of real Oscar partying.

But the lone nominee who made an appearance was “Precious” director Lee Daniels, at the Artists for Peace and Justice cocktail party thrown by Vanity Fair at the Beverly Hills Hotel.

Daniels was the only nominee but not the only celeb, as director Paul Haggis, so involved with Haiti even before the earthquake, has rallied more and more bold-faced names to the cause. Among’those crammed into the BHH’s bar were’Gerard Butler, Maria Bello (a steadfast supporter), Ben Stiller, Jon Hamm and Jennifer Westfeldt,’ Nia Vardalos and Ian Gomez, Matthew Bomer, Kristen Bell, and Paula Wagner and Rick Nicita. That’s what they call a nice crowd in Hollywood.

Here’s what we gleaned from this gathering: Daniels confirms the imminent arrival of Mariah Carey, who will attend tomorrow night’s Indie Spirit Awards and may even hit the Oscars. Jon Hamm told me the wait for “Mad Men” is nearly over, as shooting begins in April. What will happen? “Only Matthew Weiner knows,” he said. Even Hamm hasn’t seen a script. A movie Hamm made with Josh Lucas two years ago is being released finally, but even Jon can’t remember much about it. He’s much more interested in Ben Affleck’s “The Town,” which opens this fall.

I do love Nia Vardalos. She’s written a script with Tom Hanks that he’s directing and starring in, along with Julia Roberts. “Tom came back from a trip and he said, ‘Remember that script? Let’s get it out. I’ll direct it,’” Nia recalled over the din of Haiti supporters. “Then he said, ‘How about Julia Roberts in it, too?’” Vardalos made a comic face of joy at that point. She will not be in the film herself, though. “There’s really no part for me,” she said. She could make a Hitchcock-like appearance, however.

Meanwhile, over at Luckman Plaza, the big office tower on Sunset and Doheny, Nick Jones‘ famous Soho House is back. And I do mean back in a big big way. Soho House (which is also owned by Richard Caring) now occupies the two top floors of Luckman. Here’s a recap: The NewYork-London private club opened in the raw space on the top of Luckman two years ago. Then last year, while they pondered what do with the space, they opened Cecconi’s in the old Mortons restaurant on Melrose.

Now the Luckman space is totally renovated, and it’s the most glamorous new room in Los Angeles. Jones invited over a small coterie of friends to preview how the whole thing will work. You now enter on the floor below the penthouse and ascend a wide’lighted’ marble staircase that curves heaven-wards below a gigantic crystal chandelier. Clark Gable and Jean Harlow should be at the top, but instead there are lots of really cool people from Hollywood and the media. Last night, Elisabeth Murdoch (Rupert’s liberal daughter) had a big table, CAA’s Bryan Lourd got a tour, and Andre Balazs (who has his own rooftop aerie in NY — the Boom Boom Room) sampled the goods. There were a lot of British actors, including Matthew Rhys from “Brothers and Sisters” (he’s really Welsh) and Will Kemp and so on. Tonight Elton John takes over and Saturday night Harvey Weinstein celebrates those “Inglourious Basterds.”

Still: Where are the nominees? Not even at Chateau Marmont, where billionaire Nicholas Berggruen tossed a rambunctious welcome party for just about everyone in town. Funniest moment: A 25-year-old German actor bopped over to two-time Oscar winner and legend Jane Fonda, who’d stopped by for a minute’with boyfriend Richard Perry. The guy started hitting on Jane! “Don’t I know you?” he asked exuberantly. “I think we met at the Golden Globes! What’s your name?”

“Jane,” replied the Hollywood royalty, and shook his hand. And then she and Perry skedaddled into PR maven Peggy Siegal’s car.

And that was just the first night!