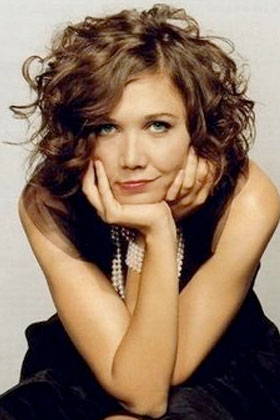 “I’m going to enjoy all of it,” she told me the other night at a USA Network/Vanity Fair party held in the thick of the big snowstorm. All the USA Network TV shows were being celebrated–”Characters Approved.” There were lots of TV people roaming around Barry Diller’s magnificent IAC Building lobby waiting to hear the cast of “American Idiot” perform. Gyllenhaal was one of a few who were just being saluted for being themselves. Nora Ephron was another. (The IAC building looked like a giant lit up snowflake on the dreary West Side.)

I ran into Jeffrey Donovan and Bruce Campbell, stars of “Burn Notice.” Tamara Tunie, from “Law and Order,” was there with her singer husband Gregory. Matthew Bomer, star of “White Collar,” brought his blue eyes. (He was once almost cast to play Superman.) Also shaking off the blizzard: Piper Perabo, Saffron Burrows, Gabrielle Anwar, designer Narciso Rodriguez, and “Precious” Best Actress nominee Gabourey Sidibe. An animated Marc Feuerstein, of “Royal Pains,” emceed the presentation of various awards like he was George Jessel at a bar mitzvah.

Constantine Maroulis, of “American Idol” fame, told me he was taking a night off from “Rock of Ages” before heading back into the musical’s grueling weekend schedule (five shows from Friday through Sunday).

And then there was Maggie. “I’m looking forward to doing the whole thing, all the parties. I know it’s crazy, but why not?” she said. I agree! Embrace Oscar Week. “I’m hoping I can bring my mom, too, to the Governors Ball.” That’s screenwriter Naomi Foner. Otherwise, Maggie’s date will be actor husband, Peter Sarsgaard, who shoulda been nominated for his supporting role in “An Education.”

“My mom is throwing me a little party over the weekend,” Maggie confided. “Just family, and my teachers.” Her eyes lit up. “But they we’re going to do everything.” She has a full understanding of Mo’Nique’s trajectory as the “Precious” favorite.

“She’s the one person I really wanted to meet,” Maggie said. “But she didn’t come to the Nominees Luncheon.”

And Gyllenhaal is psyched for her co-star, the odds on favorite Best Actor, Jeff Bridges. “If he wins, it will bring the movie to a wider audience, and that’s all anyone wants.”