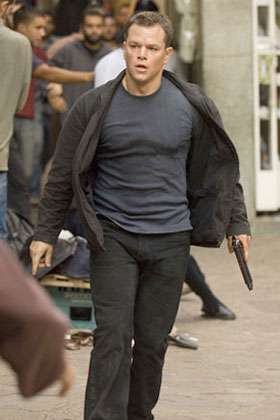 At the rate things are going, a fourth installment of the “Bourne” series remains, sadly, doubtful.

Last night at the premiere of “Green Zone,” starring Matt Damon and directed by Paul Greengrass — who directed “The Bourne Ultimatum” — the question was asked. And really, no one could answer it.

Of course, Matt Damon told this column months ago that he wouldn’t make a Bourne movie without Greengrass.

Now Matt can only shrug. At the party at Nobu 57 following the “Green Zone” screening, there was a low murmur about trying to do a “Bourne” prequel. Ever since “Star Trek” (2009) took off , everyone in Hollywood wants to make a prequel about the early days of known characters. Look for Woody Allen to make “Alvy Singer, Teenage Hero” soon. (Just kidding. But Grammy Hall would be much younger.)

Greengrass told me, “I don’t think I’ll do it. I’ve done it.” A Universal source said, “We have to wait for a script.” Damon doesn’t know. He’s pushing “Green Zone” and getting ready for the role of his life in the Coen Bros.’ update of “True Grit.”

“It’s based on the original novel, not the John Wayne movie,” he said. “The script is amazing. And yes, it’s violent.”

Matt did tell me a couple more things of interest. He and Ben Affleck have set up a deal to try and make the story of Yankee pitchers Mike Kekich and Fritz Petersen. But it’s a long way down the road, since no script exists and no one’s ure how to write the saga of teammates who switched wives. Screenwriters Brian Koppelman and David Levien (”Oceans 13,” “Rounders”) said they’d been collecting info on the two couples for years. Maybe they’ll wind up writing it.

“Ben has always wanted to make that film,” said Matt. Affleck–the two will always be connected–debuts a new film he directed later this year called “The Town.” His “The Company Men” which played at Sundance may wind up with The Weinstein Company, sources say. “The Company Men” is a good, very real and troubling film with surprising performances by Affleck, Kevin Costner, Chris Cooper, and Tommy Lee Jones.

But no more Bourne for now, folks. Go see the “Green Zone” when it opens March 11th. It’s the closest thing to being Bourne again.

[CORRECTED: There are three movies in the “Bourne” series.]