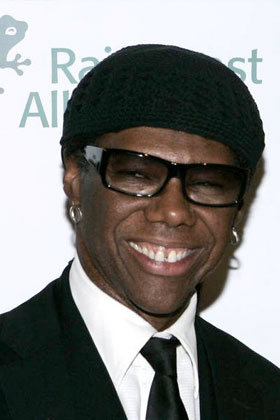 Rodgers is thinking of naming the book after his monster Sister Sledge hit “We Are Family.” That’s also the name of his and Nancy Hunt’s successful charitable foundation.

I told him last night at a party for “Hurt Locker” screenwriter Mark Boal that he should call the book “Upside Down.” That was Niles’ hit with Diana Ross many moons ago.

Rodgers has quite a story to tell: He became an overnight phenom with Chic along with late music partner Bernard Edwards. But along the way he fell into drugs, hard. He cleaned up his act in the mid 1980s and went on to become a huge producer for Ross, the B52s and many other stars, including Bob Dylan, David Bowie, Duran Duran and even Madonna (he produced “Like a Virgin”).

Right after the World Trade Center tragedies of Sept. 11, Nile and Nancy put out the word and recorded an all-star version of “We Are Family” to preach tolerance. That record led to the We Are Family Foundation, which has gone on to build schools in Africa and help teens in the U.S. You can read all about it here.

Rodgers’ book should be a page-turner. It’s going to cover his formative years in New York at the famed Max’s Kansas City, running with the likes of Debbie Harry and Lou Reed, and hitting it big with Chic in 1977 on hits like “Le Freak” and “Good Times.” Hey wait — that’s a good title — “Good Times.”

The book should hit stores in about a year. Hopefully in that time, Rodgers will ready the release of some unheard Chic music from the early ’80s, as well as a solo album by beloved Chic vocalist Fonzie Thornton that’s said to be amazing.

P.S. Also at the “Hurt Locker” cocktails no less than New York Times editor-in-chief Bill Keller, plus famed documentary filmmakers DA Pennebaker and Chris Hegedus, actor Bob Balaban, and, of course, “Hurt Locker” director Kathryn Bigelow. Boal and Bigelow are on their way back from London — where the film won six BAFTA awards — to possible Oscar gold in Hollywood on March 7.