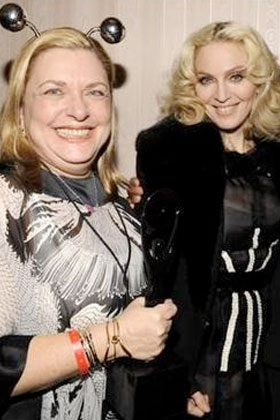 This was inevitable since Madonna has long ago left Warner Music Group for Live Nation.

For a long time, Rosenberg handled not only Madonna but several Warner related artists who are also now gone including Prince, the Pretenders, Stevie Nicks, Cher, and Rod Stewart. According to a press release, she’ll set up a new company called Liz Rosenberg Media. She says she’ll handle some WMG clients on a consultant basis. And, of course, she’ll still be with Madonna.

In many regards, Liz has been a genius with Madonna. Many times she’s had to turn lemons into lemonade, as they say, particularly as Madonna created new and more interesting scandals over the years. Most of Madonna’s career has been based on inventing scandal to promote something, and Liz has been as much if not more of the brain trust in that regard.

Some of Madonna’s best scandals involved her marriages and divorces (Sean Penn, Guy Ritchie), affairs (Alex Rodriguez, the current boy toy Jesus Luz), her “Sex” book (which should be interesting reading for her newest kids), and her immersion in the pay for play religion Kabbalah Center in Los Angeles that turned into her conquering of the country of Malawi. Through all this, Liz has somehow managed to hold her head high!

So congrats to Liz Rosenberg. It’s the end of yet another era at the hit starved Warner Music Group.