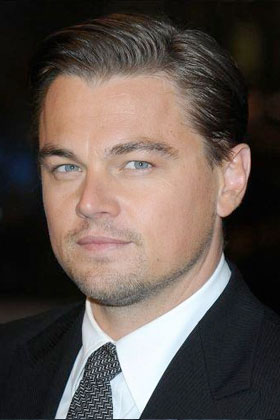 Leonardo DiCaprio is still to set to play Frank Sinatra for Martin Scorsese. But he’s probably not going to sing.

“With those records?” Scorsese asked me, his voice rising, at the premiere last night for his new DiCaprio collaboration, “Shutter Island.” “Frank will do the singing. But we’re waiting for a finished script.”

So while he’s waiting, Scorsese’s next film will likely take a break from DiCaprio. “The Invention of Huge Cabret” is lighter fare for Scorsese, about a 12-year-old boy who lives in Paris and meets famous French silent film director and magician George M’li’s.

“Hugo Cabret” is a family movie, unlike “Shutter Island,” which opens Friday and is a complex, disturbing thriller. Based on a novel by Dennis Lehane (”Mystic River”), “Shutter Island” was set for release last fall but pulled back at the last minute. That turns out to be a good thing, because although DiCaprio could have earned an Oscar nomination “Shutter Island” is a perfect winter film. “Silence of the Lambs” and “Fargo” were each winter movies that went on to big things at the end of the year.

“Shutter Island,” if you don’t know the book, is certainly a shocker. Beautifully shot and edited (of course by Thelma Schoonmaker) it also has a bunch of perfect “cameo” performances by Michelle Williams, Patricia Clarkson, Emily Mortimer, and Jackie Earle Haley. It’s partially an homage to Alfred Hitchcock, too, with a pulse-heightening score created by The Band’s Robbie Robertson from pieces of modern classical music.

Last night Mick Jagger was one of the many A list guests at the premiere at the Ziegfeld ‘ but he’d apparently seen the movie a couple of times already. I won’t give away the plot twists, but Mark Ruffalo ‘ who plays DiCaprio’s buddy as a U.S. Marshall ‘ turns out to be the clue maker. At least, that’s what Oscar winner Schoonmaker tells me. She cut the film down from its original unwieldy length to its new streamlined form. She told me, “The next time you see it, watch Mark. See what he’s doing.”

Ruffalo ‘ who was the King of Sundance last month ‘ and Sir Ben Kingsley steer DiCaprio through a mental maze that’s layered and harrowing. Scorsese fans won’t be disappointed. This is a horror/thriller of such grace and intelligence that it’s going to take several viewings just to get it right. But that’s all the more fun.

Among the other celebs at last night’s showing: Regis and Joy Philbin, thrilled with the news that their CD, “Just You, Just Me,” hit number 1 yesterday on amazon’s Easy Listening chart. (More impressively it’s number 104 overall). This is thanks to an appearance with David Letterman. Who says late night doesn’t sell music anymore?

Plus: co-star Michelle Williams, who’s going to have a big year (she’s also in “Blue Valentine,” now set for the fall from the Weinstein Co.). Williams did not follow the pack of Paramount peeps and the movie crew downtown to an afterparty at a new hot new eatery on Stanton Street called The Meatball Shop. “I’ve had two glasses of Champagne,” Michelle said, soberly, “and I have to get up early in the morning.”

P.S. The great character actress Celia Weston brought her buddy, actor Ron Raines, who’s licking his wounds from the cancellation of CBS’s “Guiding Light” by touring in “A Little Night Music.” Two time Oscar nominee Sylvia Miles made the scene. And no less than the magnificent Oscar winner Celeste Holm, who turns 93 on April 29th, put her stamp of approval on “Shutter Island.”