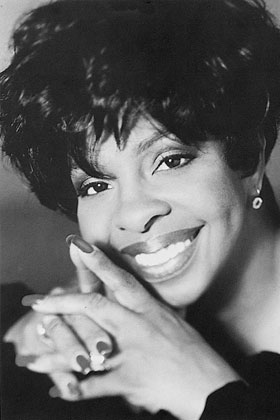 Most 65-year-olds are not working full-time.

But Gladys Knight, who’s been working since 1952, has not lost a step after almost six decades in show business.

Two weeks ago I ran into her at Quincy Jones’ “We Are the World” taping in Los Angeles. Gladys is front-and-center with Jennifer Hudson, Mya, Usher, Lil Wayne, and dozens of other younger stars. Will their careers last as long? For most, it’s unlikely.

On Friday night, by coincidence, I caught Gladys’ act at the Naples Philharmonic Hall in Florida. She came by bus from Atlanta with her band and her brother Bubba, the last remaining “Pip” and her best friend. She’s in the middle of doing six dates down South. As usual, the venue was sold out.

Backstage, Gladys exhibited not a sign of Diva-ness. She greets fans in jeans, without makeup. On stage it’s a different story. She looks about 50 tops, and wears a silver lame pants suit that shines through the huge auditorium.

The act runs just a little less than 90 minutes and covers most of the hits from her long career. At Motown, Gladys was the one who discoverd the Jackson 5 — a fact she should mention but doesn’t. She also had a hit with “I Heard It Through the Grapevine” before Marvin Gaye. Maybe she’s tired of explaining it all.

She does tell the story of recording “If I Were Your Woman,” one of her many hits during a very fruitful period in the early to mid ’70s. “I told Berry Gordy I didn’t want to do it. Then I said, please don’t make it a single.” She laughs. “It’s a good thing he didn’t listen to me.”

Bubba — whose real name is Merald — gives Gladys a break during the show. He does some comedy, and sings Al Green’s “Love and Happiness.” At the end, he returns and has a duet with her on “Yesterday.” Their affection for each other is so real you can feel it way in the back. Nice. And Bubba can sing. What a treat it must be for him to not just be doing the train-dance moves from “Midnight Train to Georgia.”

Gladys is spectacular. Of course, if performers were paid for radio play of their hits, she could stay home. She’s one of many stars who didn’t write her own material. Only writers get royalties. Recording artists depended on concerts and sales of records. The latter is well over now. So the live appearances count. Gladys ‘ like many others ‘ has to keep on keepin’ on.

She gives 150% on stage. Even when’the audience drifts (this is Naples, they’re older), Gladys is belting out the tunes with a voice that sounds better than ever. There is no Auto Tune. Her butterscotch sound is unmistakably hers.’The roar of her throat is one thing. She is also gifted musically. You can tell as a warhorse song like “Wind Beneath My Wings” is reworked to sound new. She’s done that a few times in her career, with “The Way We Were” and “The End of the Road” ‘ hits first for’others and then inhabited by her.

But she can bring on the funk ‘ “Save the Overtime for Me,” “Love Overboard,” “I’ve Got to Use My Imagination,” even “Neither One of Us” ‘ it all drips with soul. And then Gladys and Bubba are back on the bus, and headed to the next gig, spreading a little happiness.