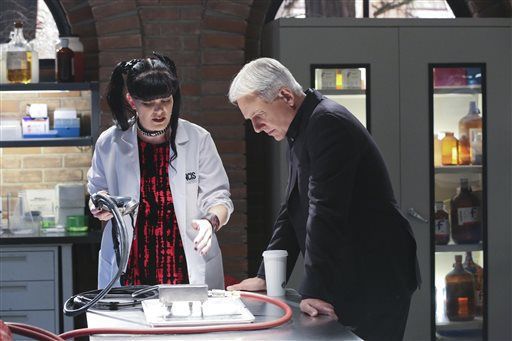 “NCIS” fans are crying this morning over the exit of actress Pauley Perrette after 15 years. She played forensic scientist Abby Scuito with verve and humor and was the de factor leading lady of the series.

There was no reason Perrette should leave. and she’s never given an adequate explanation. But last night’s episode was meant for reading between the lines. Perrette and the series’ difficult leading man, Mark Harmon, never shared a scene or spoke to each other for the whole hour.

This was cleverly accomplished. Right until the end, Abby and Harmon’s Gibbs weren’t even in the show together. For the final moments, the producers cut together two close ups as the characters waved goodbye in sign language.

Otherwise, Abby and Gibbs had no contact with each other. She told her pals at NCIS she was leaving and hugged them all– except Gibbs, who wasn’t even in the room. Think about it: Abby was shot and Gibbs didn’t even visit her in the hospital.

Years ago, when Lauren Holly was the female star of the show, sources told me in detail how badly Harmon treated her. She was forced to leave the show. Perrette has been very diplomatic about her exit. She hasn’t said a word about Harmon. But silence speaks volumes. She’s posted a lot of photos and Tweets to other fellow stars of the show, but none about or with Harmon.

In addition to Abby’s exit, another character left “NCIS” last night, the MI6 agent Clayton Reeves. He was played by so well by black British actor Duane Henry. So, “NCIS” managed to shed a woman and a black man. Was this part of CBS’s diversity program? On a network that has one female (Tea Leoni) and one black dramatic lead (Shemar Moore) for its series, this news should be pretty upsetting.