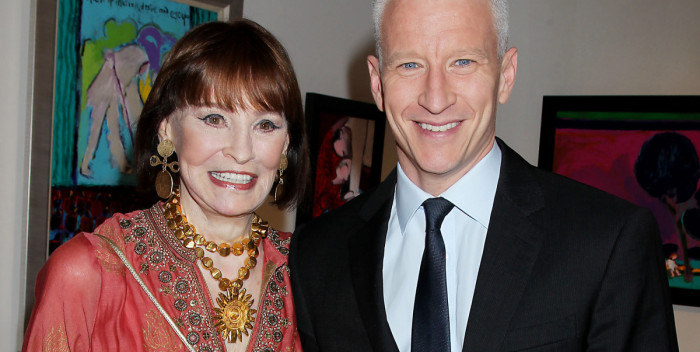 At last night’s screening of HBO’s “Nothing Left Unsaid,” Anderson Cooper admitted his mom, Gloria Vanderbilt, wants him to have kids.

“She constantly has asked me about having kids, yes, and that’s something she’d like to see,” he said. “You know maybe, some day. I would certainly love… to have kids,” Cooper’s voice trailed off. “I love kids. Who knows? I work a lot, so I would have to kind of change my work schedule.” Then he shrugged yes that having children was very much on his mind.

The whole mother-son thing is what “Nothing Left Unsaid” is about. The documentary by Liz Garbus chronicles Gloria Vanderbilt’s colorful life, including her many lovers and marriages, her children, her triumphs (in art and fashion) and her tragedies (her husband Wyatt Cooper died at age 50 of a heart attack and her son Carter committed suicide at age 23).

Mainly, Cooper interviews his mother and also provides loving and humorous comments about some of the more curious things she’s done in her life – marriage at 17 to a man who may have murdered his first wife – and his mother’s ordeals, like the bitter custody battle she was the center of that earned her the sobriquet of “poor little rich girl.”

The doc, which will debut this Saturday on HBO and which premiered at Sundance in January, is timed with the release of a book, “The Rainbow Comes and Goes: A Mother and Son on Life, Love, and Loss.” Copies were given out at the snazzy after party at Porter House in Columbus Circle, where filet mignon, Champagne and creamy cheesecake was on the menu.

Many people may be surprised to learn that Gloria Vanderbilt– born into one of America’s wealthiest dynasties– had four children. Not that it’s a secret but that it seems only the two younger children – Anderson and Carter – are widely known. In the book Vanderbilt says of motherhood, which she knew little of first hand since her mother, who was only a teenager when she was born, was remote and cold, says in the book, “Being am mother wasn’t what I expected at all… Little did I know that you, Carter, Stan and Chris would be the greatest joys of my life.”

A big mystery in both the book and the documentary is how her son Christopher Stokowski, from Gloria Vanderbilt’s second marriage to acclaimed composer Leopold Stokowski, 43 years her senior, has disappeared from their lives and is barely mentioned. Stan Stokowski, the other son from that marriage, who is a handsome man in his 60’s, was at the premiere and in the documentary and talks about his mother with whom he is close but mentions how he felt like an outsider once she started her new family with Cooper’s father. (Gloria Vanderbilt was also married to Sidney Lumet for seven years and dated Frank Sinatra briefly.)

The book is in the form of a conversation and series of emails, which Anderson orchestrated and began when his mother was nearly 91 and which cemented their already close relationship. Near the end of the book Vanderbilt writes a note to Anderson and tells him that his father was “the most honest person I met in my life.” She adds, “I know these values reside in you. I fervently hope that you will become a father. If this is to be, don’t wait too long… Consider making a loving partner and a family your true foundation of success. Please give it serious thought. Who knows, I hope I’ll still be around if it happens.”

Maybe she will. Gloria Vanderbilt looks terrific. Her signature bob was shiny, make up perfectly applied and she looked svelte in a pearl grey satin pant outfit. She still has a girlish aura. Now a little fragile, Vanderbilt still walks straight without a cane and she leaned only slightly and occasionally on her famous son.

At the after party I asked Anderson about whether his mother had a good time (I didn’t see her at the after party.) “She had an amazing time,” he told me. “She is thrilled to see the movie come out and thrilled with the response to it and the response to the book has been incredible, so it was a great night for her.” As for her health, “It’s very good. She’s great,” he said. “I mean she’s 92. She’s sharper than ever and she’s working every day, painting every day, so things are good.” Her paintings are available to purchase on her website and she’s preparing for her next exhibition of paintings on April 27.