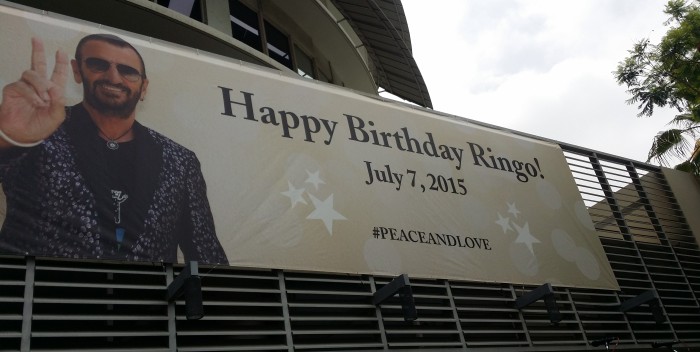 The place to be today in Hollywood was at the famed Capitol Records building where Ringo Starr was feted for his 75th birthday and where he spread his mission of peace and love. Ringo, the Beatles and Capitol are inextricably linked forever, so it was an appropriate setting.

In the hub-bub, I asked Ringo if he was planning ever to write a book.  The Beatles have been memorialized in dozens of tomes, but except for George Harrison’s memoirs, there is no official autobiography. Ringo answered,  “No, I do it on record.  There’s a track on the last album [Postcards from Paradise[ that deals with my life in Liverpool, in Rory and The Hurricanes [his first group] and with the Beatles. That’s how I’m doing it. So I’m not going to be sitting down writing a book. Other people are writing books but they don’t really relate to me, I don’t feel. “

The show started with comedian and actor Richard Lewis: “Ringo is one of the greatest drummers that ever lived.  He had a small garage band that did quite well. Ringo’s message is peace and love every day.  Starting with the high officials that should get the fucking word.”

Joe Walsh toasted Ringo: “In high school when I was a freshman, a Beatles album came out, and I sat in my bedroom for hours and played it.  I would read the cover, back then they had covers and the album was round and big for you younger people, over and over, and I would listen to the drum part. I just wanted to meet one of the Beatles one day so bad.  Careful what you pray for.  Here we are today, it’s Ringo’s 75th birthday, and he’s about 35!”   Ringo called out, “Hey –I’m 34!

Joe continued, “It’s peace and love day.  The world is a mess, violence doesn’t work, peace and love, compassion and understanding is the only thing that’s going to get us out of this mess. For what Ringo has been through, he’s so down to earth straight across, he’s funny, a really good person and he’s been talking about peace and love for a long time he’s the minister of peace and love.” 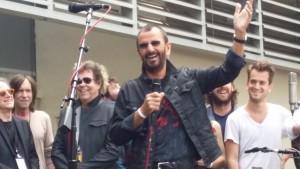 Ringo is the spriest 75 year old could hope to find. He bounded on stage and told a tale:  “There’s a great African expression. When a guy is coming to you from miles and miles away, and they guy who is in the hut says I see you, the other guy says ‘I am here.’  How beautiful is that? Not ‘How are you doing? I’m fine how are you?’  It’s  ‘I am here.’  We’re all here today and we’re all here for a good cause-what a segue!”

He continued,  “ All this support for peace and love how great is that!  Ten years ago in Chicago, out of the blue I was asked what would you like for your birthday?  I thought if everyone would say peace and love at noon, wherever they are.  The support is rising for peace and love-that’s why I’m here.”

Ringo thanked director David Lynch, whose Foundation supports Transcendental Meditation.  Ringo said: “His Foundation brings mediation to inner city schools, and the violence has gone down.  He helps the veterans, a lot of them are shattered and with his mediation a lot of them are coming back. We have to thank Edgar Winter for “Frankenstein,” my lovely wife Barbara, Glen Ballard and Joe’s wife Marjorie who looks like Barbara cause they are sisters.”

A singalong to Happy Birthday ensued. He flashed his peace sign and Ringo was off.

All photos for this story c2015 Showbiz411 by Leah Sydney