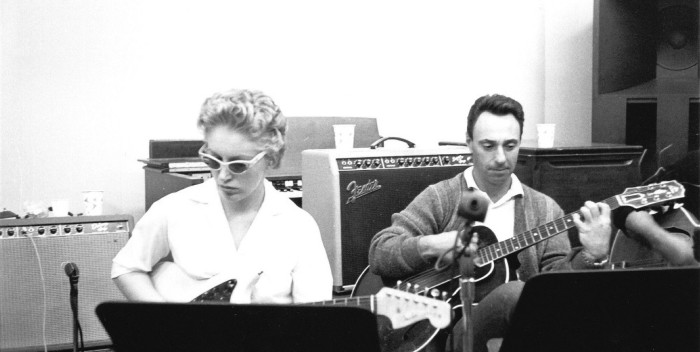 Where do I begin with my love for Denny Tedesco’s “The Wrecking Crew”? It opens Friday somewhere, and probably goes to DVD and pay TV soon. You must see it if you love the music of the 60s and the 70s. These musicians played on all the biggest hits. Sometimes they stood in for the groups that were promoted to the public– like The Association and The Monkees.

They played on all of Phil Spector’s hits and created the Wall of Sound. The big names that came out of the Wrecking Crew were Glenn Campbell and Leon Russell, and Sonny and Cher. But you’ve got Hal Blaine, Bones Howe, and Tommy Tedesco, Denny’s dad, who were unsung heroes and legends among musicians.

“The Wrecking Crew” is a long time in the making– like 20 years. For a long time Denny couldn’t get clearance for all the music he included. Somehow it’s worked out. He covers almost everything and everyone, with the notable exception of the Fifth Dimension. All their records were made by the Crew, with their gorgeous voices soaring above Blaine and crew.

But everyone else is here. Fans of Cher will see just how smart and funny she is, and how well she looked when she did these interviews. (Seems like right after Sonny’s death in 1998.)

If you’re looking for relevance, and topicality, this jumped out at me because of the current Robin Thicke-Marvin Gaye lawsuit. Tedesco and friends (bass player Carole Kaye, a legend and the only woman) discuss how the sheet music meant little. It’s what they did with it that made the hits memorable.

My favorite pieces– an interview with Nancy Sinatra about recording “Something Stupid” with her dad; the whole discussion of surf music; Plas Johnson and Earl Palmer; and everything about Hal Blaine. also, I love the fact that Phil Spector is a small part of the story. Get this film.

PS Some people will say “Be My Baby” is the zenith of the Wrecking Crew. Some may say “You’ve Lost that Lovin’ Feeling” or “Wichita Lineman.” Or “Good Vibrations.” So many to choose from. Here’s one of my favorites: