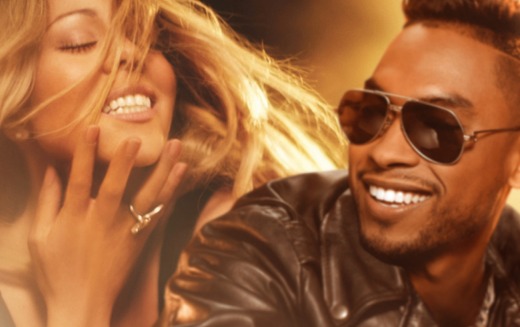 Mariah Carey runs to the rescue of “American Idol.” With ratings precariously low, and “The Voice” playing directly against it next Wednesday, “American Idol” needed something to give it a boost. That brings Mariah to the story. She’ll debut the new video for her new song, “Beautiful,” on the show on May 8th. “Beautiful” is a mid tempo pop song with an usually catchy and sophisticated melody. It’s co-written, sung and produced by newish sensation Miguel. I’ve heard “Beautiful” and it’s a hit. A real hit that fans will sing along with.

The rather short–about 3 minutes, 3 seconds– single opens with Miguel singing to an acoustic guitar. After the first verse and chorus, Mariah makes a spine-tingling entrance. I am told her album, still unnamed, is just in this vein– lots of great singing, very little singing, no hip hop, all songs with a capital S. My only peeve about “Beautiful” is that it’s too short– I think the album version should be longer.

And the album– it’s coming sometime between June 25th and July 7th, my sources say. First Island DefJam has to launch Kanye West’s new album, recorded in Paris, on June 18th. That’s confirmed also, but no title has been given. It should be called “Keeping Up with the Kardashians– Literally.”

And here’s another scoop: while we were sleeping, Mariah changed managers. She and Randy Jackson decided their schedules were too hectic. So Carey has signed with Red Light, the same place Steven Tyler just joined. Red Light is the brainchild of Corin Capshaw, the mastermind behind Dave Matthews. It’s a hot hot agency.