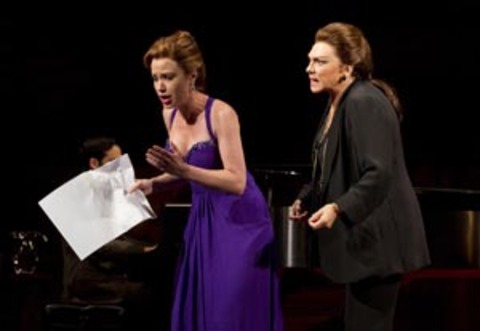 Tyne Daly–you may know her from “Cagney and Lacey” on TV, but she’s been a presence on Broadway for some time. Last night she opened in a revival of Terrence McNally‘s “Master Class” and just wowed an audience that included pals like Swoozie Kurtz, Jan Maxwell, Donna Murphy, Jennifer Morrison (from “House”), Mario Cantone,  Doris Roberts, Joy Behar, Natasha Lyonne. Daly plays opera legend Maria Callas late in the singer’s life as she teaches a master class for opera singers in New York. Daly is simply superb, and if she stays with the production, and it does well, she’ll be nominated for a Tony next year. She’s remarkable in every sense, while the play holds up very well. The secondary characters are all portrayed beautifully considering they require three actors who more than competently sing opera, and a pianist on stage.

In 1995 Zoe Caldwell played Callas. Daly told me at the BB King after party that that performance “is in my all time top 5. I called Zoe today,” she said, for good luck. “Master Class” is masterful, and a rare treat during a hot New York summer.

Meanwhile, I ran into Natasha Lyonne, who would have been a hit comedic actress I think long ago if personal problems had not sidetracked her. It’s okay, she’s only 32, and has plenty of time. Lyonne –I can tell you exclusively–has just signed on to reprise her role of Jessica in the “American Pie” reunion movie called, surprise, “American Reunion.” She joins Jason Biggs, Chris Klein, Eugene Levy, and Sean William Scott in the comedy. Lyonne, I believe, was the last holdout from the original 1999 cast. Since the original, she made her name in “Slums of Beverly Hills” and Woody Allen‘s “Everyone Says I Love You.” Lyonne is ready for an HBO comedy series–she could be a real “overnight sensation.”