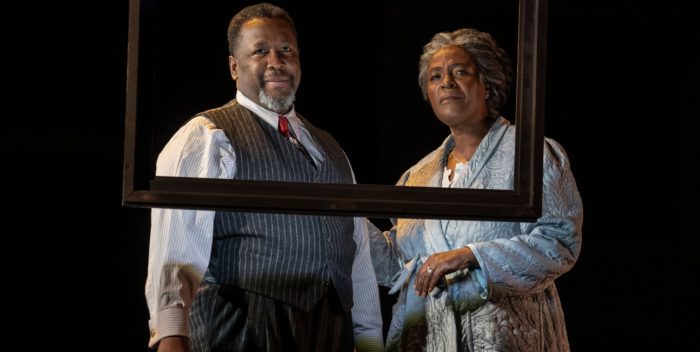 Almost four years ago I ran into the great actor Wendell Pierce sitting in the lobby of the Four Seasons hotel in Los Angeles following a Hollywood event. He had a script in his hand, and I asked him what it was? He replied that he was going to open in “Death of a Salesman” in London’s West End. What? That sounded like a pretty good idea at the time.

Sure enough, the first mostly Black production of Arthur Miller’s towering drama opened that May at the Old Vic to rave reviews. The production won a bunch of awards including an Olivier Award nomination for Pierce and win for Sharon D, Clarke as Linda Loman.

The pandemic and Scott Rudin prevented this “Death” from arriving on Broadway until this past October. Rudin, before he was kicked out of Broadway, was going to bring in a production starring Nathan Lane. When opening night finally arrived, I had a two week flu, and missed all the standing ovations. So this week I caught up with it.

Suffice to say, Wendell Pierce is absolutely electric on stage, and so is Clarke. They are, as they say nowadays, “on fire.” Andre de Shields, a Broadway legend, has joined the cast as Willy’s ghostly brother, Ben, appearing in a blazing white suit as either an angel or devil, take your pick. Two younger Black actors with real heft, Khris Davis and, McKinley Belcher III, are Biff and Happy. Mixed into the main cast are white actors, as well, playing Howard, the heartless son of Willy’s employer, Charley, the neighbor, and Charley’s son, Bernard.

The woman Willy is sleeping with in Boston is also white. This brings new dynamics in “Death of Salesman” even though not a word has been changed. The cast, especially Pierce, gets that and they bring nuances we haven’t see before in the last almost 75 years that this play– and its subsequent movie — never showed. This is underlined in scenes when Willy is caught with The Woman (Lynn Hawley) at the motel. “There may be laws against this in Massachusetts,” Willy tells her because it’s the late 40s, and a Black man with a white woman would no doubt result in arrests. (When Willy and The Woman are both white, you think laws against prostitution, not race.) Similarly when Willy is fired by Howard, whose father loved Willy, it comes across as racism, not ageism.

The audience gets all this, I saw and heard the reactions at the Hudson Theater. (They also get the play’s humor, and respond approvingly.) The director, Miranda Cromwell (she and London co-director Marianne Elliott shared an Olivier for Best Director) is subtle enough not to change a Miller word, but the result is stunning and must be experienced. Cromwell and the cast have opened up a play nearly every adult knows by heart, so that we get an entirely new interpretation and appreciation of Miller’s genius. As much as the Lomans are ingrained in our minds already, eyes fill with tears even more so as Pierce details Willy’s rise and fall. He is really exceptional.

You’ve only got three weeks left to see this “Death of a Salesman” on Broadway. Run, don’t walk, to the Hudson. In addition to the casting there is another change: music. Music was always included in “Death of a Salesman,” but now we’ve got a blues guitar player and a singer (Grace Porter) on stage, and some deeply soulful singing from the great Sharon D. Clarke, who is as known for her ferocious voice as much as her dramatic prowess.

The show closes January 15th, but I will remind Tony voters every day from now until April that Pierce and Clarke must be nominated for their work. The whole production should remain fresh in minds for Best Revival of a Play. This is a landmark, and real theater lovers will never forget it.