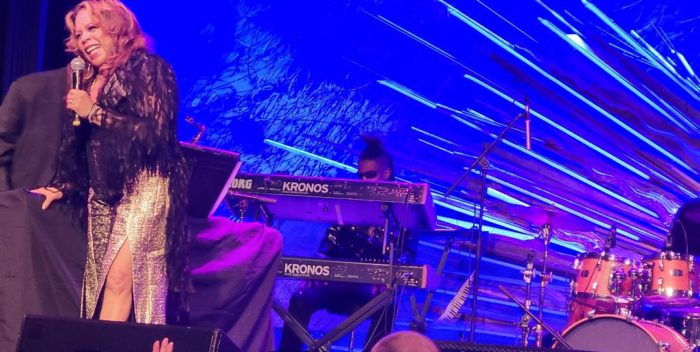 The biggest problem I could see last night with Valerie Simpson’s insanely jubilant show at Sony Hall was that every song sounds like it’s the grand finale– that’s because every number is a huge hit.

Simpson mostly performs at her own small gem of a venue, the Sugar Bar, on the Upper West Side. But last night was the second time she’s recently performed her new, thrilling show that recalls the massive number of hits she wrote with late husband, Nik Ashford, for Motown in the 60s and then as a successful R&B duo Ashford and Simpson.

This show wasn’t “off Broadway” it was really under it, at the terrific Sony Hall in the basement of the Paramount Hotel in Times Square on West 46th St. With the exits of theaters like BB King’s and the Highline Ballroom, Sony Hall has really become a tremendous location for star performers. And this room — which is large– was packed solid, shoulder to shoulder with fans who love Ashford and Simpson’s music and know a big secret– Valerie Simpson at 76 sings like a rock star.

Simpson is about five feet tall, but on stage she’s a foot taller at least when she’s shimmying in a black and gold couture dress. Always cute, with a cherub face, she can belt out any number and hold her own with the best. (A few years ago, she even played Mama Thornton in Broadway’s “Chicago.”) She’s a dynamo, and if it weren’t for her occasional solo outings she might be forgotten as a singing, not just writing, star. (SImpson did have a solo album on Motown 40 years ago that’s worth checking out.)

Last night, Simpson ably proved herself with a set of hits that’s unrivaled. I particularly liked her  rendition of “The Boss,” which she and Nik wrote for Diana Ross and never recorded on their own. (She should record this show immediately.) The show is book-ended with two different takes on the Motown national anthem, “Ain’t No Mountain High Enough” — one in the Ross edition, the other Jocelyn Brown’s disco take on the original Marvin Gaye/Tammi Terrell record. There was also “Your Precious Love,” “You’re All I Need to Get By,” Simpson, alternately playing piano (she’s the original Alicia Keys) and boogeying across the stage, conveys infectious romance and joy.

Then there are the crazy, even bigger hits: Ross’s “Reach Out and Touch,” Chaka Khan’s (and Whitney Houston’s) “I’m Every Woman,” and the A&S classic, “Street Corner” (the latter from an album I think wore the grooves down on a long time ago). Any one of these would be a showstopping end number, but Simpson wraps it up with A&S’s beloved, funkaliciously delightful “Solid (as a Rock).”

Of course, keeping it a taut 90 minute show, Simpson leaves out a lot of songs we’d like to hear, from “Send It” to “Is it Still Good to Ya.” But there is nothing like hearing her start “I’m Every Woman” at the piano and then having the crowd explode into dancing when the beat changes. It didn’t matter that there was no possible social distancing either (you couldn’t have this show with masks). She also has a crack band on stage with the great Felicia Collins on lead guitar.

By the way, how influential do Ashford and Simpson remain? Valerie joked on stage that “Ain’t No Mountain High Enough” had to made it to a Taylor Swift remix. “What’s that song called, girls?” she asked her two adult daughters from the stage. They shouted back, “Anti-Hero!” Indeed, “Mountain” is the basis of a popular remix of Swift’ enormous current hit. Simpson responded with the usual twinkle in her eye, “I got the check!”

It would be grand if an expanded version of this show had a limited Broadway run, or off Broadway, or right there in Sony Hall. It’s the most entertaining musical of the fall season. There’s even a little scripted part with one of the backup singers playing Berry Gordy, who flew the couple out to Detroit in the mid 60s after hearing their Ray Charles hit, “Let’s Go Get Stoned.” Ashford, Simpson recalled, almost walked out of the meeting, but Gordy ran after him, and the rest is music to our ears.