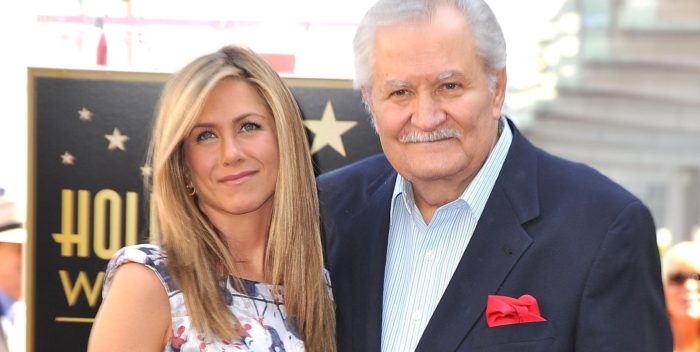 John Aniston, long time star of “Days of our Lives,” has died at age 89. Aniston was a TV actor long before his daughter, Jennifer, became one of the biggest stars in the world from the TV show, “Friends.” He was 89.

Aniston played tycoon Victor Kiriakis on “Days of our Lives.” He started out as a villain but over the years turned into a crochety but lovable pot stirrer and patriarch of a large family. Despite being in declining health, Aniston appeared in the daily show on a fairly regular basis until recently. He’d sit in a large, comfortable chair and give advice — or warnings — to the other characters. But “Days” shoots months in advance, so Aniston probably had not actually worked in some time.

For years before “Days of our Lives,” Aniston starred as Martin Tourneur on “Search for Tomorrow.” And he had a long resume dating well before that, with dozens of TV appearances. His TV history was immense. He joined “Days” in 1985, but had already appeared as another character long before, in 1970. He won a Lifetime Achievement Award this past summer from the Daytime Emmy Awards.

PS NBC owes John Aniston a broadcast special of “Days of our Lives” — not on Peacock, on the network. He worked for them for 42 years.

Our hearts are broken over the loss of our beloved family member John Aniston. We love you John. Your legend will live on.
#DaysOfOurLives #Days @peacock pic.twitter.com/IWPArGRKQH

“Sweet papa…⁣ John Anthony Aniston ⁣
You were one of the most beautiful humans I ever knew. I am so grateful that you went soaring into the heavens in peace – and without pain. And on 11/11 no less! You always had perfect timing. That number will forever hold an even greater meaning for me now 🕊️I’ll love you till the end of time💔⁣
⁣
Don’t forget to visit 💫🤗❤️”