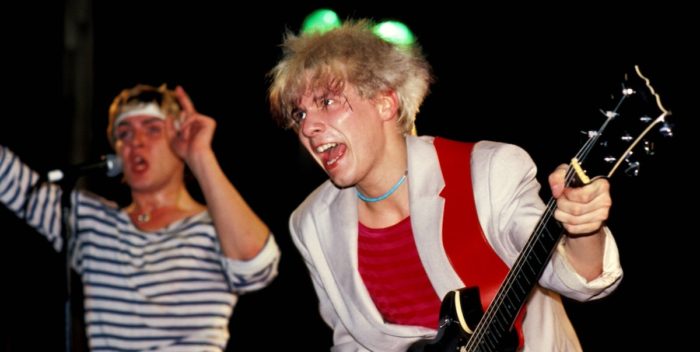 Duran Duran was inducted into the Rock Hall of Fame Tonight in Los Angeles. But it was a bittersweet night at Simon LeBon revealed that original member Andy Taylor has stage 4 pancreatic cancer.

Taylor, 61, is a writer, producer and singer for Duran Duran and their spin off band, Power Station. His heartbreaking letter to fans appears below. He was part of the band for all its big hits like “Hungry Like the Wolf” and “Rio.”

I wanted to send a personal note to pass along my sincerest respect to you all for what’s been an amazing career, and to also share what has happened to me.

Firstly, can I say what an absolute honour it was to be nominated let alone be inducted into the RRHOF. There’s nothing that comes close to such recognition. I’m proud of everything we’ve achieved together and of the way you have continued. As a guitar player in a progressive band from the synth days of the early eighties, literally from the day I met Nick, John, Simon and Roger they truly valued the contribution of a rather noisy, versatile Northern brat. We all grew up on the same vinyl records and live gigs, from David Bowie to Roxy Music, The Sex Pistols and of course CHIC. I could go to all those places as a player and developed a hybrid guitar style that fitted this amazing concept OF A BAND…

I loved going into the studio and recording our material; nobody else sounded like us. We were ripe to absorb what was the art of analogue recording, but with some different kit, Nick’s artful obsession with synth technology was something I’d never seen before and I was introduced to layers. Because we were instinctively the right fit, we evolved very quickly, writing RIO as our second album with the confidence our very early success with ‘Girls On Film’ and ‘Planet Earth’ inspired.

You can dream about what happened to us but to experience it, on one’s own terms, as mates, was beyond incredible.

I would like to thank each of my brothers in this great band.

My family: my incredibly sane wife of 40 years – Tracey – my amazing children, Andy, Georgie, Bethy and Izzy, not forgetting my grandson Albie, who’s probably online listening or on Fortnite!!!

The Producers: Colin Thurston, Alex Sadkin, Bernard Edwards and Nile Rodgers – I’ve also really dug the work with Mark Ronson – I particularly admire ‘All You Need Is Now’, that’s a DD melody if ever I heard one.

Thanks also to Merck, Andrew and Wendy.

Now for the bad blood, well the good news is that there is none, just pure love and respect for everything we wrote, recorded and achieved together. What’s the point? There’s no stopping this 44-year thing called “Duran Duran”.

Now to the reason I’m not here:

Just over 4-years ago I was diagnosed with stage 4 metastatic prostate cancer. Many families have experienced the slow burn of this disease and of course we are no different; so I speak from the perspective of a family-man but with profound humility to the band, the greatest fans a group could have and this exceptional accolade.

I have the Rodgers and Edwards of doctors and medical treatment that until very recently allowed me to just rock on. Although my current condition is not immediately life threatening there is no cure. Recently I was doing okay after some very sophisticated life extending treatment, that was until a week or so ago when I suffered a setback, and despite the exceptional efforts of my team, I had to be honest in that both physically and mentally, I would be pushing my boundaries.

However, none of this needs to or should detract from what this band (with or without me) has achieved and sustained for 44 years. We’ve had a privileged life, we were a bit naughty but really nice, a bit shirty but very well dressed, a bit full of ourselves, because we had a lot to give, but as I’ve said many times, when you feel that collective, instinctive, kindred spirit of creativity mixed with ambition, armed with an über cool bunch of fans, well what could possibly go wrong?

I’m truly sorry and massively disappointed I couldn’t make it. Let there be no doubt I was stoked about the whole thing, even bought a new guitar with the essential whammy!

I’m so very proud of these four brothers; I’m amazed at their durability, and I’m overjoyed at accepting this award. I often doubted the day would come. I’m sure as hell glad I’m around to see the day.