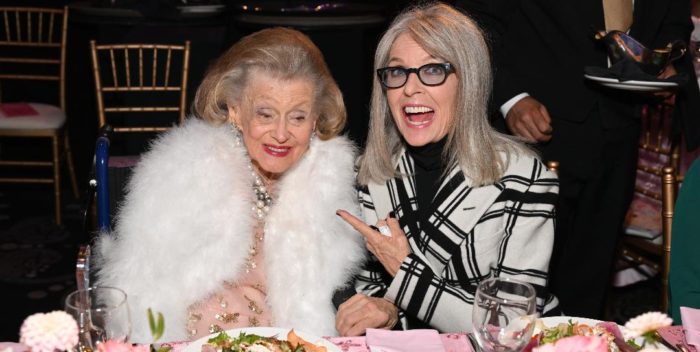 Barbara Davis, the classiest most indefatigable lady in Hollywood, turned 92 this weekend and she co-hosted her beloved Carousel of Hope Ball the day before her birthday.  It’s her 36th year of hosting the event, she started the Barbara Davis Center or Diabetes in Denver more than 40 years ago along with her husband, the powerhouse Marvin Davis.

The reason was personal for both, their daughter Dana Davis, who was the co-host along with her mom, was diagnosed with diabetes at the age of seven.  Barbara recounted the story that when she told her husband Marvin Davis that their daughter was afflicted, he didn’t miss a beat and said, “well fix it then.” That’s exactly what she’s been doing along with Hollywood’s A-listers over the years. This recent one was no exception.

Diane Keaton was honored with the “Brass Ring Awards,” and the crowd enjoyed performances by John Legend, who was solo at the piano and just sensational, his rendition of Bruce Springsteen’s “Dancing in The Dark” was sensational.  Andy Grammer and Deborah Cox were equally as terrific.  Howie Mandel hosted the event.  Diane talked about the need for the center and then focused her gaze on Barbara.  “Barbara, I adore you, I love you.  You are such a spectacular woman.  You are the inspiration and I’m so fortunate to call you my friend.”

We agree!  George Schlatter and his lovely wife Jolene were also a part of the team as was Quincy Jones.  The evening celebrated Barbara Davis and all she has accomplished.  Brava to her!