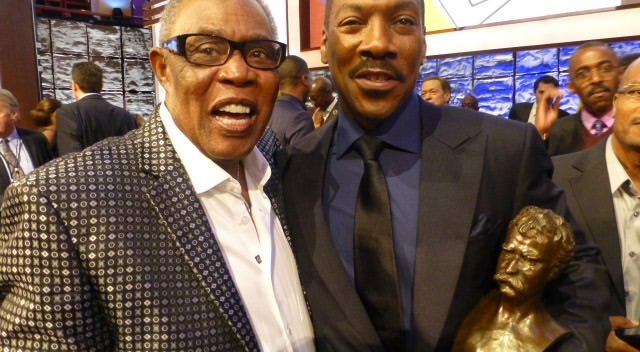 Next month, Sam Moore is listed as the credited guest artist on at least two tracks on Bruce Springsteen’s new album. In five decades, Bruce has never had a track that read “featuring so-and-so.” So it’s a big, big deal.

And a nice birthday gift for Sam, who turns 87 today. A legend from Sam & Dave, member of the Rock and Roll Hall of Fame, Grammy winner, singer for presidents, Sam has seen it all. And sung it all. His vibrant voice is heard somewhere every day around the world on his hits like “Soul Man,” “Hold On I’m Coming,” and “I Thank You.” If you’re in the supermarket and listening to the radio above, Sam’s magnificent voice cuts through the air as its own instrument.

It hasn’t changed. “I’m making my gospel album right now,” Sam told me from his home today via telephone. “It’s something I have to do.”

I met Sam in 1999 when he agreed to let us follow him around for a documentary called “Only the Strong Survive.” Now he’s on Bruce’s album of the same name (a tribute to another R&B giant, Jerry Butler). Sam is the only shouted out name still alive from the Arthur Conley classic, “Sweet Soul Music.” Everyone is gone — Wilson Pickett, James Brown, all the greats. Some of Sam’s Motown buddies are still around, like Stevie, Smokey, and even Berry Gordy– but Sam Cooke, Jackie Wilson, all left us early. We are so lucky to still have Sam (with a lot of thanks to his super wife, Joyce).

Hey– and here’s a nudge to Atlantic Records– Sam has no star on the Hollywood Walk of Fame. Can you imagine who’d show up for that installation?

PS I love that picture of Sam with Eddie Murphy. Eddie asked Sam to perform at his Kennedy Center Mark Twain Awards ceremony a few years ago!