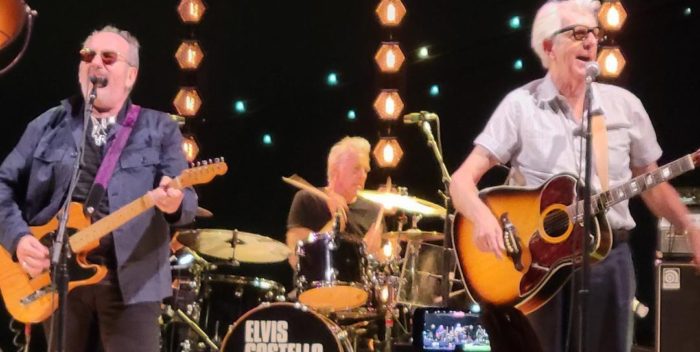 I first saw Elvis Costello and Nick Lowe perform together at Boston’s Orpheum Theater in 1978, Mink Deville was also on the bill. At time, Lowe was producing Elvis’s albums– he’d go on to do quite a few– and his own hit record, “Pure Pop for Now People” –titled “Jesus of Cool” everywhere but America.

Last night the pair reunited under a magical full moon at Pier 17’s rooftop venue at the South Street Seaport. (May I say that I’ve never encountered as friendly a staff as the one at Pier 17? They seem to be on happy pills.)

I think the only other time I saw Elvis and Nick together was in 1989 at CW Post College on Long Island. So it’s been a while. (I was in grade school and had to get up early!)

These guys are not kids anymore. Lowe is 73 and sporting a full wavy head of gray hair. Costello turns 68 later this month. Costello’s band, the Imposters (formerly the Attractions) are his contemporaries. Additionally, Costello is promoting an EP of six songs with his teenage bandmate from 1972, Alan Mayes, who’s English but lives in Austin, Texas and plays the bar circuit there.

So it was a night of reunions, young men who have aged into fine musicians, showing off skills that are almost as lost as scriveners’ penmanship or competition kite flying.

Lowe and his group (oddly masked, not for COVID, don’t know why) Los Straitjackets turned in a relaxed but enthusiastic set that included some of his nicest songs. “Cruel to Be Kind,” a song I heard in 1978 faster and poppier, has taken on a kind of elegance. “You Inspire Me,” from a later period, remains a stunning ballad. Where Lowe was once “the Basher,” meaning he thrashed his guitar to make power pop, he’s now more comfortable almost as a crooner. (Oh, for his rockabiliy days with Dave Edmunds as Rockpile!)

Costello and his gang — Steve Nieve, Pete Thomas and Davey Faragher, plus their ringer, so to speak, Texas guitarist Charlie Sexton — are indefatigable. They handle punk, new wave, jazz, country and R&B without missing a beat. Newer songs like “Hetty O’Hara Confidential” continue to grow in richness. Somehow they also find nuances in “Watching the Detectives” that expose what we couldn’t get in 1977 when it was released, the underpinnings of all those genres. And the Raymond Chandler riff — “She’s filing her nails while they’re dragging the lake” — is still pungent.

Costello has added Nicole Atkins, a terrifically talented female vocalist to his latest album, “The Boy Named If.” Her voice recalls Carlene Carter combined with Bonnie Raitt. When they sang a duet called “Still Too Soon to Know,” the audience, not knowing that well — an obscure track from the 1994 album, “Brutal Youth” — and waiting for a greatest hit. was swooped up by the emotion.

The show was punctuated by Lowe returning for duets on “Indoor Fireworks” and his own “What’s So Funny ‘Bout Peace, Love, and Understanding” the latter was much more deliberate and detailed than Costello’s usual pounding reverie. I missed the trademark drum thunder, but this version served Lowe well since he is the actual author.

Mayes also made an appearance as Costello is over the moon about their reunion. They sang two Nick Lowe songs from their EP, “Surrender to the Rhythm” (a catchy precursor to Lowe’s later standard, “So It Goes”) and a very Poco-esque number called “I’m Ahead If I Can Quit While I’m Behind“that kind of captures Lowe’s love of country music and the irony of clever lyrics.

There were no songs from Costello’s Grammy winning masterpiece, “Look Now,” or his all time great album, “Imperial Bedroom.” He such a big, deep catalog that if you want to hear songs like “All This Useless Beauty” or a favorite rocker like “Clubland,” you;ve got to find it for yourself. Luckily he’ll return next February for 10 shows at the Gramercy Theater, where he promises to play 200 different songs.

In the meantime, don’t miss this chapter in the long, brilliant Costello saga.