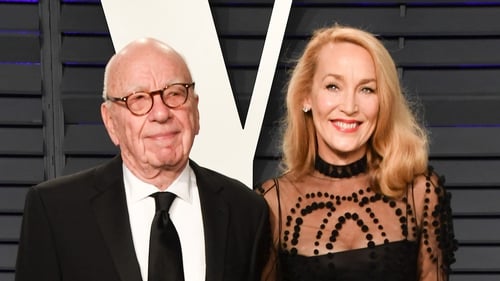 Finally a little news about the mysterious divorce between Rupert Murdoch and Jerry Hall.

The Blast reports that Jerry was fired from the marriage by email. She was told all further contact should be to his lawyer.

Hall has filed for divorce in Los Angeles, even though the couple was married in London. So that should make things interesting. Apparently Rupert bought her a Montana ranch spread during the marriage. She could be using that address.

In the filing, no prenup is mentioned. But as The Blast points out there has to be one. Billionaires don’t go into these things without them.

Did the kids interfere? Almost certainly Kendall, Shiv, Roman, and Connor– er Lachlan, Elisabeth, James and Prudence — wanted Jerry out, and certainly out of the estate pending Rupert’s inevitable death. He’s 91, and those kids don’t want Jerry at the funeral with a big black hat. So credit to them for accomplishing their mission. This is typical in these late-in-life marriages, we’ve seen it before with moguls who get younger partners close to the ages of their original kids.

Jerry Hall should do well, however, no matter what happens. After all, there’s always that book…