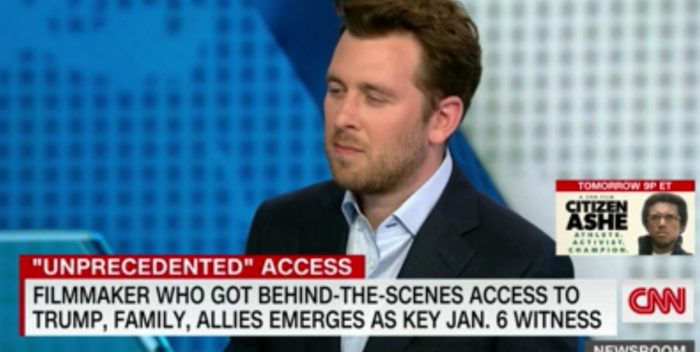 The January 6th Committee is holding a surprise hearing tomorrow at 1pm. Previously they said the rest of their hearings would be in July.

But the pressure is on to deal with filmmaker Alex Holder and his “Unprecedented” documentary. Holder spents months in the Trump White House from September 2020 through and past January 6, 2021. He had free reign filming everyone there and getting all kinds of inside stuff as a fly on the wall.

Already little clips from “Unprecedented” have been shown on network TV, and Holder has given interviews. So the Committee would be smart to deal with the whole thing ASAP before more leaks out. “Unprecedented” is set for either streaming or theatrical release maybe as early as July. If it’s proven to be accurate, the film could be like a “CitizenFour,” the film about Edward Snowden that won an Oscar.

Already, Holder’s run into a little trouble, getting blowback from Mike Pence, who argued that the film made his reading of an email seem like something else. CNN’s Jake Tapper even questioned Holder’s telling of that story. So it won’t be a walk in the park for Holder, but his testimony in front of the Committee will be key to what happens next.