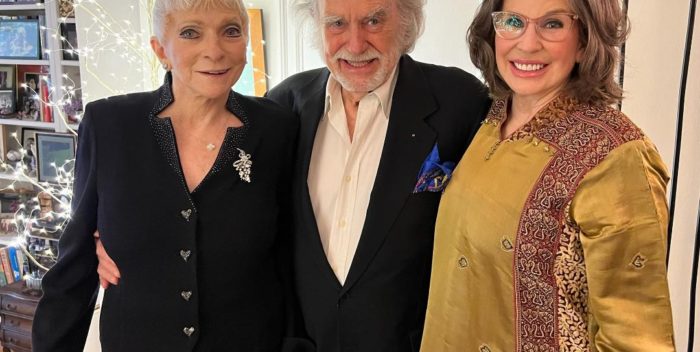 As I told you two weeks ago, famed singer Judy Collins has debuted her first new hair style in many decades. The 83 year old with hits like “Send in the Clowns” and “Both Sides Now” showed off her chic, short cut on Tuesday night at a cocktail party for graphic designer husband Lewis.

Nelson, designer of the Korean War Memorial in Washington DC, has just publishing a book about the experience and his life, called “Mosaic.” So Paige Peterson, the great doyenne of Central Park West, invited over nearest and dearest to celebrate Nelson’s outstanding achievement. On July 27th in DC the memorial will be re-dedicated because it now includes the thousands of US soldiers who died in Korea.

There were plenty of surprises at the gathering. Judy did show off the haircut, a replacement for a wig she’s been wearing the last couple of years after losing some hair during a virus. (Not the virus.) She was famous for her long locks. Ironically, one of the guests– legendary photographer Harry Benson — arrived with a portrait of Judy from the 70s from his archives that he had specially printed and framed for her.

Other guests included “Law & Order” and “MIami Vice” writer David Black, “All My Children” actress Jennifer Bassey, famed Hollywood manager and Broadway producer Stevie Phillips (“Best Little Whorehouse in Texas”), George Michael biographer James Gavin, and a dozen or so more friends who had the rare chance to hear Judy — wearing an ornamented short black jacket and skinny black pants — sing a capella, and I might add, magnificently. The Voice is still there, maybe even more so!

PS Judy is always concertizing. But she also has an exceptionally beautiful new album out called “Spellbound” which had better be on the Grammys short list this fall for Traditional Pop or Folk Album. It’s a total winner!