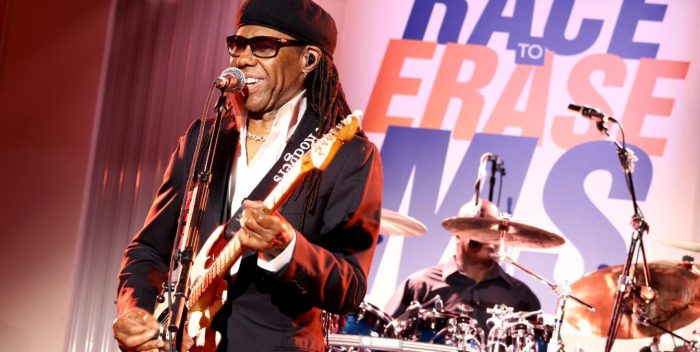 Nancy Davis just does not stop in her quest to find a cure for MS, which she was diagnosed with at the age of 33.  She told us at the recent ‘29th Annual Race to Erase MS Gala’ at the Fairmont Century Plaza that, “We [the Center Without Walls that she founded] haven’t given up.  We’ll give up once we find a cure.  We have 22 drugs on the market now to stop the progression of MS, which is pretty much a miracle.  It’s not by accident, so many of the same people have come every year, giving us their time and talent throughout these years and we are finally back in our original ballroom; it’s wonderful to have the synergy back! ”

Tommy Hilfiger has been involved for many years and he put on an inspiring ‘Adaptive Fashion Show’ where models of all abilities showcased his collection.  Nile Rodgers & Chic (who just landed in LA from London only hours earlier) rocked the packed room.  Cybill Shepherd, being her sassy fun self, spoke at the podium as her daughter, Clementine Ford, has MS.  She noted, “That diagnosis of my daughter Clementine was one of the most difficult days of my life, but she’s doing great right now and I have two grandchildren.” Cybill proudly showed her jacket with Elvis’s picture on the back, calling him her former “paramour.”

Nancy Davis noted from the podium that  “As Marie Curie was quoted, ‘Nothing in life is to be feared, it is only to be understood. Now is the time to understand more, so we may fear less.’ When I was diagnosed 30 years ago with MS and told there would never be a cure, that I had what was called a hopeless disease, my instinct was to search for answers, to understand, to fear less. As a young mother of three, I had become fearless, with so many hopes and dreams for my future, obliterated with one doctor’s visit. I’m so grateful that I didn’t listen to the hopelessness and took a path of hopefulness.”

At the end of the night, in what has become a poignant and hopeful tradition,  singer/ songwriter Siedah Garrett (who wrote Michael Jackson‘s “Man in the Mirror” and had a hit duet with the King of Pop) led the crowd, along with Nile Rodgers, Greg Phillinganes and Nancy singing “Lean On Me.”  Attendees included Kathy and Rick Hilton, Garcelle Beauvais, Frances Fisher, Ed Begley Jr, Joely Fisher, Greg Germann, Katie Cassidy, Victoria Justice, Vanna White, Vivica A. Fox, Taryn Manning and more.  The 29th Annual Race To Erase Gala raised over 1.4 million.  Bravo to the indefatigable Nancy Davis!