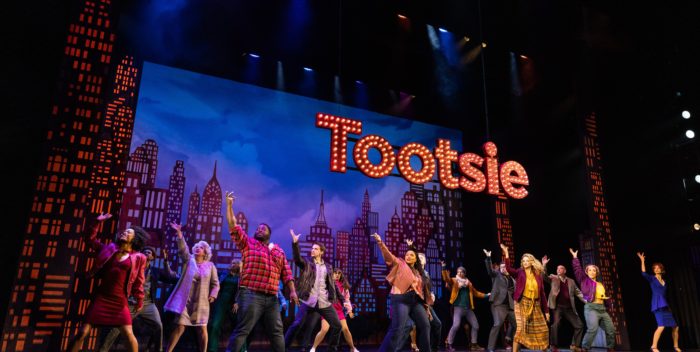 How to get rid of the echo of Will Smith’s famous slap at the Dolby Theater just three weeks ago?

On Tuesday night, the musical of “Tootsie” debuted as part of the “Broadway in Hollywood” series which runs until May 15th. A middling hit on Broadway, “Tootsie” was the recipient of a enthusiastic standing ovation from a packed house on its opening night.

From the movie to the stage musical; “Tootsie” boasts impressive Broadway credentials, with a Tony-winning book by Robert Horn and a marvelous jaunty and funny score by multiple award winner David Yazbek (“The Band’s Visit,” “Dirty Rotten Scoundrels.”)

This hilarious musical tells the tale of the temperamental but talented actor Michael Dorsey (a terrific Drew Becker), who in an act of desperation lands a dream role in a Broadway musical transforms himself into an older, outspoken actress named Dorothy Michaels. Dustin Hoffman invented the character for the hit 1982 film in a memorable performance. Santino Fontana won the Tony Award for bring Michael/Dorothy to Broadway.

Updated to acknowledge the change in gender awareness, the show manages to do all that with looniness, humor, wittiness, poignancy and fun. The entire cast is sensational, especially Peyton Reilly as Michael’s frantic, put up on ex girl friend who’s looking for love and success and not finding it so fast.. The crowd simply loved her and deservedly so.

The rest of the “Broadway in Hollywood” rest of the season includes Alanis Morissette’s “Jagged Little Pill,” “Moulin Rouge,” ” Harper Lee’s To Kill A Mockingbird,” ” Six The Musical,” “Tina.” and “Beetlejuice.”  Theatergoers in LA get exactly the same fabulous theatrical experience as they do on The Great White Way. Pretty impressive