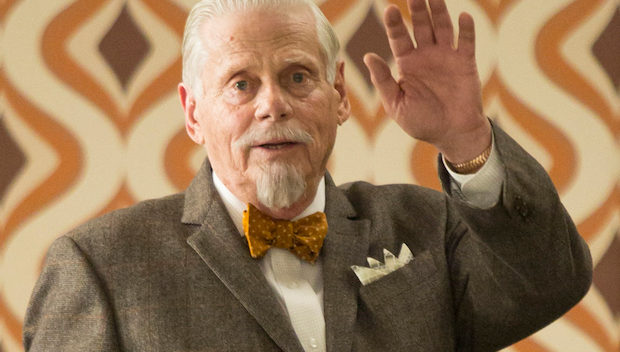 Robert Morse is gone at age 90. His impish charm, noted everywhere this morning, served him well. His big early moment came in 1962’s “How to Succeed in Business Without Really Trying,” for which his extremely charming performance won him a Tony Award for Best Actor in a Musical. He won another Tony in 1990 for his one man show as Truman Capote as “Tru,” and an Emmy award for play Capote in a 1980 TV special.

To more contemporary audiences, Morse was better known as Bert Cooper, founder of ad agency Sterling Cooper, on “Mad Men.” He was nominated for Best Guest Actor in a Drama five times between 2008 and 2014 in that role which he made iconic and beloved before getting a big musical number upon his exit. (He should have won.)

But it was Morse’s J. Pierrepont Finch in “How to Succeed” that cemented his career all through the 1960s. First it was on Broadway and then in the movie in 1967, each time with Michele Lee, later the star of “Knots Landing,” as his Rosemary.

and here is as Bert Cooper: