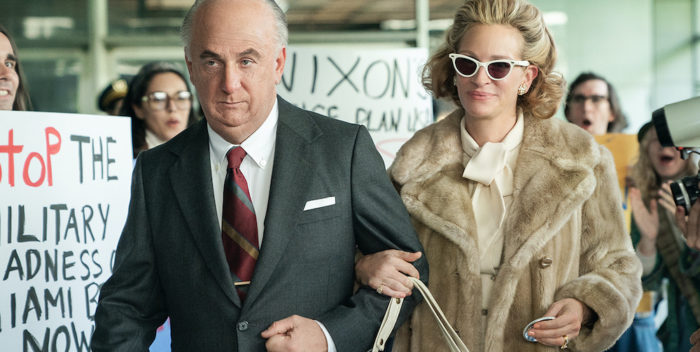 If you thought you saw the Slap of the Month a couple of weeks ago thanks to Will Smith, think again. There’s more slapping to come in “Gaslit,” the Starz Channel limited series starring Julia Roberts as Watergate era whistleblower Martha Mitchell and Sean Penn as her husband, Attorney General to Richard Nixon, John Mitchell. I won’t spoil it for you, but April has become slap-happy.

Listen, I grew up to this soundtrack. As Watergate evolved through 1972, Martha became an iconic figure, a Southern belle in DC calling reporters in the middle of the night ratting out the Republicans. John Mitchell was, as far as I’m concerned, as evil as Nixon.

Penn and Roberts are just sensational in their roles. Roberts, kind of expanding on her “Charlie Wilson’s War” character, has got the right mix of foxiness and grandness to make Martha appealing. Penn has a twinkle in his eye as he makes John Mitchell, I would guess, far more dimensional than he was in real life. What could this series have cost to have two mega watt Oscar winning Hollywood stars? The nice thing is, they are each line for line up to the challenge of pulling off an A+ show here.

This is an 8 part limited series, and the first of its kind for Starz when it comes to prestige. “Gaslit” will put them in the Emmy race, and set them up for more quality programming. So it’s all good news. Robbie Pickering created the series and wrote the episodes. Matt Ross, of “Captain Fantastic” fame, directed the first episode.

The first episode sets up a lot of characters from Watergate lore besides the Mitchells. Chief among them is John Dean, who I remember from the Watergate hearings as snot-nosed preppie who was ready to sell out anyone to stay out of jail. Dan Stevens, of “Downton Abbey” fame, plays him with a lot more panache than Dean deserves. Betty Gilpin is charming as Dean’s prospective second wife, Mo. It seems like this couple will figure big time as the series unfolds. (The Deans are alive and still together. The Mitchells had a rancorous divorce and are now dead.)

Quick kudos to Hamish Linklater, Shea Whigham, and young Darby Camp as the Mitchell’s 11 year old daughter. But there’s a lot more to come, as those of us know who lived through Watergate. And for younger people, “Gaslit” promises to be a highly entertaining education.

I’m hooked even though I know how it all turns out. The quality here is very high, and the fun is in the details.