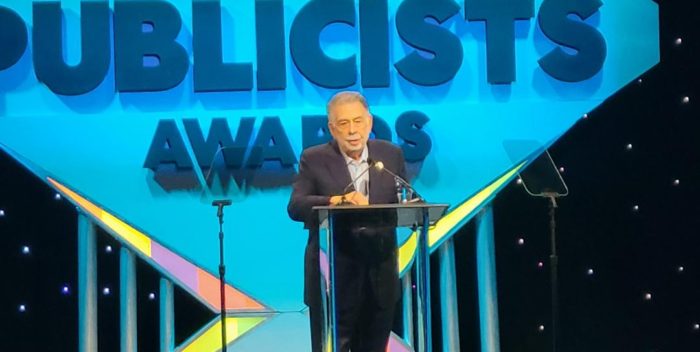 The ICG Publicists Awards luncheon was one of the best I’ve ever been to this afternoon.

“The Godfather” director, Francis Ford Coppola, was honored with a Lifetime Achievement Award. I was told Coppola would get his award and leave the Beverly Hilton quickly, but he stayed through the whole luncheon and had a pretty good time.

I asked him about the mini-series, “The Offer,” but he hasn’t seen it yet. “The Offer” tells producer Al Ruddy’s story of how “The Godfather” was made. Coppola tells me he hasn’t seen the series yet. He said “Everyone says they had something to do with the making of The Godfather. Al Ruddy wasn’t on set much because he was out there making deals and saving the picture.”

The Publicists Guild is a unique event because you get to see a lot of people you like some you don’t. The publicists get to see a few press people they’d rather forget existed. It’s very convivial.

This year the winner of the best movie campaign went to “Spider Man: No Way Home.” The TV award went to “Ted Lasso.” Both teams deserve the win, they did amazing jobs.

The Les Mason Award, the highest honor the publicists can bestow on one of its own members, resulted in a tie and was presented to both Sheryl Main and David Waldman (EVP Domestic Publicity, Paramount Pictures) by “Jackass” star  Johnny Knoxville.  Waldman gave one of the best speeches I’ve ever heard at one of these luncheons.

The Publicist of the Year Award went to the very popular Marshall Weinbaum of Disney, presented by David Alvarez from “West Side Story.” The Bob Yeager Award for Community Service was given to Chrissy Quesada Valentine, (VP Global Still Photography, Sony Pictures Entertainment) for her passionate efforts, energy, and talents to help advance the cause of animal rights and welfare, presented by Monica Guzman (Sr. Photo Editor, Sony) and Holly Connors (VP Worldwide Photography, Paramount).

Other honorees were Mike DeLuca and Pam Abdy of MGM Studios, and Sterlin Harjo and Taika Waititi, who created the TV series, “Reservation Dogs.”