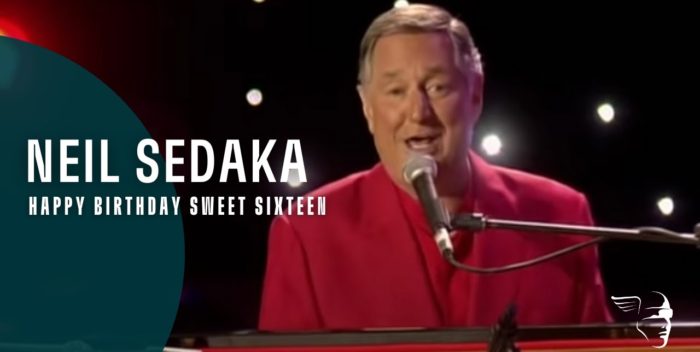 I actually ran into the great pop genius on Friday night at A list star eatery Craigs LA on Melrose. He was out celebrating his birthday early with his grandkids in the back room. When Sedaka emerged into the main room, he drew audible cheers from the tables including a big one captained by Lance Bass from NSync.

Neil wrote his first hits in his teens, then scored a huge and lasting solo smash with “Calendar Girl” in 1961. His other hits included the great “Breaking Up is Hard to Do” and “Oh Carol,” named for Carole King before she added the “e”.

All through the 60s, Neil wrote tons more hits, but the Beatles and the British invasion knocked out his early solo career. That didn’t stop him. In 1975, with his album, “Sedaka’s Back,” and an assist from Elton John, Neil triumphed like never before. He wrote “Love Will Keep Us Together,” sung by the Captain and Tennille. It was number 1 for weeks and remains one of the great pop hits of all time.

But even more: the album, “Sedaka’s Back” yielded massive hits: “Bad Blood,” with Elton John, the amazing “Laughter in the Rain,” a re-record of “Breaking Up” that sent the song to the top of the charts, plus “Solitaire,” one of the most covered brilliant anthems of all time.

Neil capped all this with “The Hungry Years,” a stunning song that has become his signature.

So why isn’t Neil Sedaka in the Rock and Roll Hall of Fame? This year, the group should just induct him. It’s embarrassing that it’s taken so long.

Happy Brithday, Neil! And we can listen to him on his new Sirius Radio talk show, too!