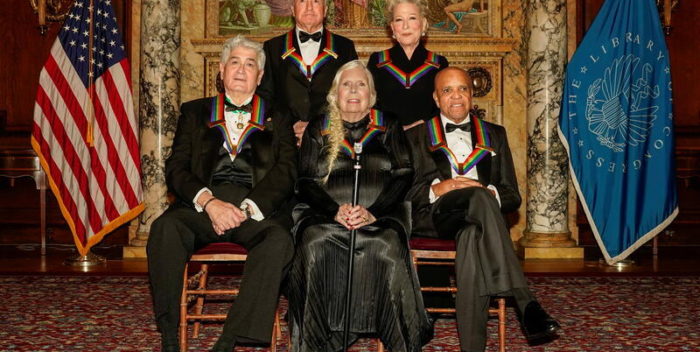 More from the Kennedy Center Honors going on right now in DC. Live. The show will air in a couple of weeks on CBS when no one is watching too carefully.

The biggest surprise of the tribute to Lorne Michaels, producer of “SNL,” is no appearance by Tina Fey. Everyone else is there connected to Lorne. He produced Tina’s “30 Rock” after her successful fun on “SNL.” That’s a headscratcher.

Bette Midler is being toasted by Goldie Hawn. Also her “Beaches” co-star Barbara Hershey. None other than Adele is narrating a film clip for her. Adele obviously has an overall deal with CBS. Scarlett Johansson is involved. There’s a “Hello, Dolly!” segment recalling Bette’s Tony winning performance. Broadway superstar Kelli O’Hara sings “Wind Beneath My Wings.”

Motown founder Berry Gordy: Oprah Winfrey narrated his film. Smokey Robinson sang for him, so did the cast of Broadway’s “Ain’t Too Proud.” And Audra Day. But no Diana Ross. Stevie Wonder appeared on tape but is also supposed to surprise Gordy with a live performance.