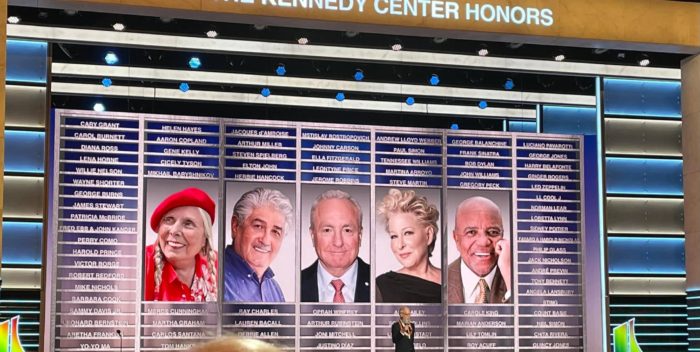 The Kennedy Center is honoring Joni Mitchell, Bette Midler, Lorne Michaels. Berry Gordy, and operatic bass-baritone Justino Díaz tonight at the DC theater. All weekend there have been ceremonies and parties for the honorees.

President Joe Biden and First Lady Jill Biden are there, ending the cold war between the White House and the Kennedy Center. So are VP Kamala Harris and husband Doug Emhoff. The Bidens spent Thanksgiving at the Nantucket home of Kennedy Center chairman David Rubenstein, who also run the secretive Carlyle Group investment firm. During the previous four years, the residents of the White House were loathed by the annual inductees and the residents had no interest in the Arts.

UPDATE: David Letterman, of all people, did the opening toast after Yo Yo Ma performed a stunning rendition of the Star Spangled Banner.

Joni Mitchell was celebrated with performances from Brittany Howard, Herbie Hancock, Brandi Carlile, and Ellie Goulding. Howard sang “Both Sides Now.” Judy Collins, who had the original hit in 1969, is in the audience. Cameron Crowe and Dan Levy (of Schitt’s Creek) also spoke for Joni.