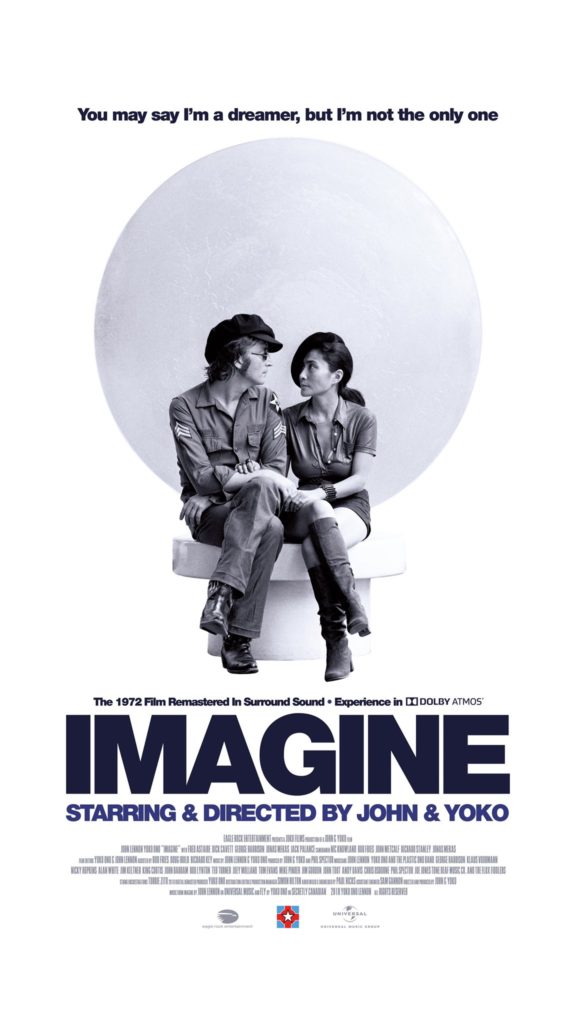 Next Thursday, September 9th there will be a worldwide observation of the 50th anniversary of John Lennon’s “Imagine” album.

Anyway the family has selected 9/9/21. Yoko & Sean Ono Lennon, the Estate of John Lennon and Universal Music Group will host a Global Party.

At 11:30am PDT/2:30 pm EDT/7:30 pm BST on September 9, fans around the world are invited to watch the Imagine film together, either online or in person at participating venues. Yoko Ono Lennon, Mercury Studios and partners including The Coda Collection, Hard Rock and Music Venue Trust will make the film available for free, while Charlatans frontman Tim Burgess’ hugely popular Tim’s Twitter Listening Party will host a simultaneous online Listening Party event.

Yoko & Sean Ono Lennon, the Estate of John Lennon and Universal Music Group will host a Global Party to celebrate the 50th anniversary of John’s “Imagine” song, album and film on September 9. The event will honor one of the most famous and beloved songs and universal messages in music history.

“John and I were both artists and we were living together, so we inspired each other,” says Yoko. “The song ‘Imagine’ embodied what we believed together at the time. John and I met – he comes from the West and I come from the East – and still we are together. We have this oneness and ‘the whole world would eventually become one’ is the sense that we will all be very happy together. All these instructions are for people for how to spend eternity, because we have lots of time.”

The unique global status of “Imagine” was emphasized yet again during the opening ceremony of the 2021 Tokyo Olympics, where it was reimagined by the celebrated composer Hans Zimmer for a worldwide audience in the hundreds of millions. It began the celebrations for both the Olympics and the song’s own golden anniversary.

John & Yoko’s Imagine, one of the first full-length conceptual music films, was also released in 1971 and contains all the songs from John’s Imagine album; four from Yoko’s Fly; and a few additional pieces. In 2018, under Yoko’s supervision, the film was completely reassembled to HD in 2018 from the original 16mm negative reels and cleaned and digitally restored frame-by-frame with the audio completely remixed in 5.1 surround sound and Dolby Atmos by triple Grammy-award winning engineer and mixer, Paul Hicks.