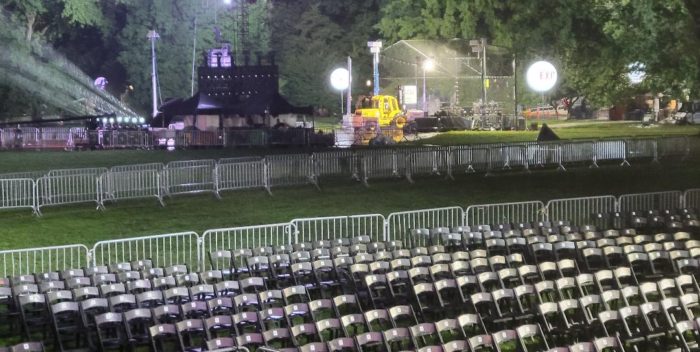 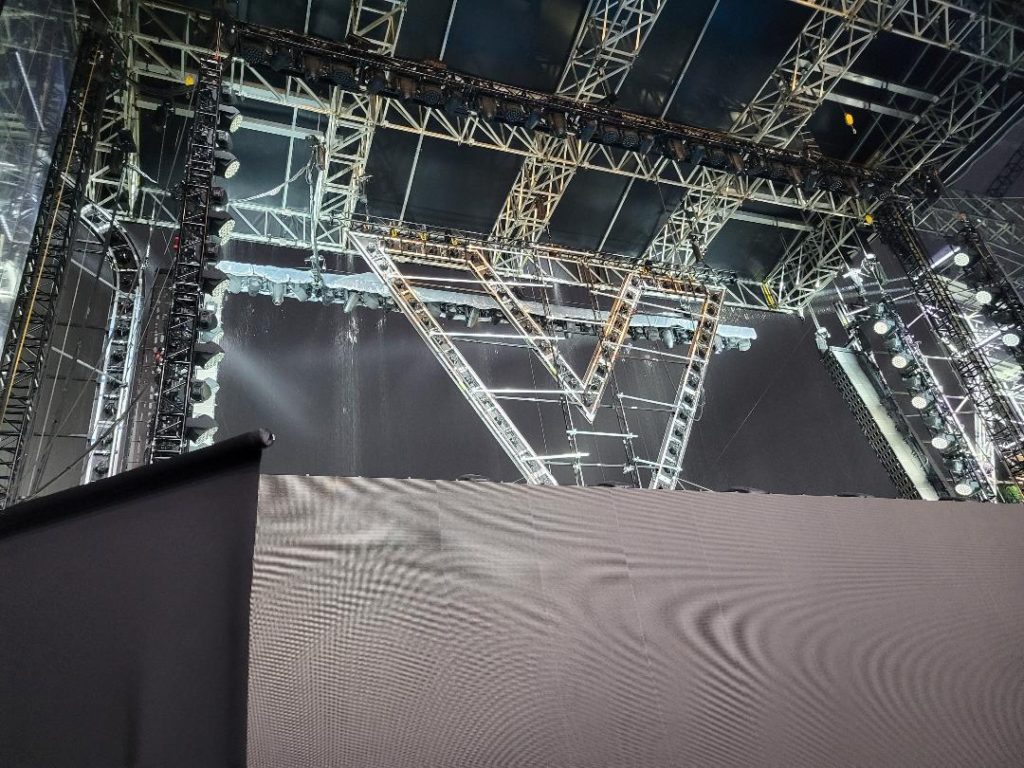 But wait: before the rain, the concert was glorious. Everything with the New York Philharmonic, especially Jennifer Hudson tackling “Nessun Dorma” as a tribute to Aretha, she deserves the highest praise.

Rob Thomas and Santana performing “Smooth,” the “Layla” of its generation. Rob glowing from sweat, coming off the humid stage after his mic mix was a mess — the perils of live performance. But “Smooth” really solidified the audience. Even Maluma’s posse was dancing to it in the family section just below the stage.

And there was nothing like seeing 60,000 people sing along to “September” with Earth Wind & Fire, Philip Bailey had them in the palm of his hand. Verdine White, in his bejeweled jacket, rocking those guitar solos, brother Maurice smiling down from heaven. Pure pleasure.

Backstage Clive’s minions — Barry Manilow, Patti Smith, Elvis Costello — waiting so patiently, knowing the ran was coming, staying and doing interviews with a giddy Anderson Cooper, who seemed to lose his mind from talking to people who weren’t survivors of an earthquake or who’d been duped by Trump.

And yet: my love for Patti Smith grew exponentially last night. When she finally realized there would be no show, and she was starving, the Punk Queen allowed herself to be spirited off to Smith & Wollensky steakhouse on Third Avenue and East 49th St. 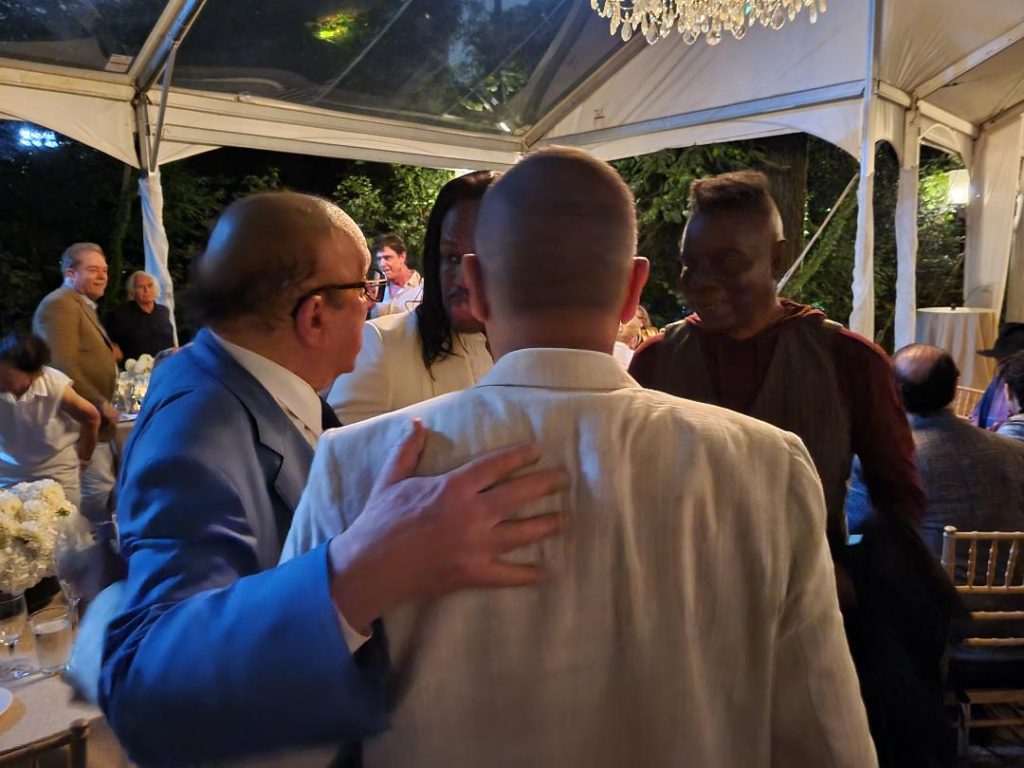 She did tell Cooper she was off site, but when the skies opened up and I was stuck on stage like a passenger on the Titanic for two hours with Clive, Mayor DeBlasio, their respective posses, the crew, half of the NYPD, musicians, and roadies protecting instruments, we all thought Patti was just across a narrow path with Elvis and Barry.

I was only disabused of this idea when finally, at 9:45pm, when it was clear the rain wasn’t letting up, I ran to the Central Park Police outpost on the 86th transverse in my flimsy pink plastic poncho and looked for passage back to the mainland. There I heard the transportation director say to someone on a headset, “Patti Smith? She’s not here. She went to a steakhouse.”

I said, “Is that a euphemism for something?” The guy says, “No, they all left. They’re at Smith & Wollensky. They’re not coming back.”  When I’d been on stage, the crew was convinced Patti was coming back to do one last number. How wrong we were. How smart Patti was. I hoped she was having the creamed spinach.

Yes, two hours on the physical stage because the sky burst open and we were suddenly, all of us, trapped in the middle of Central Park on a metal riser, only partially covered, with lots of electrical items plugged in, and lightning striking indifferently all around us. There was no way to leave until the rain let up, which many who walked by insisted would happen “in 20 minutes. I can see it on the radar.” And of course, this never happened.

Now we find out that the 1.94″ of rain that fell from 10pm to 11pm at Central Park last night was the wettest hour on record for New York City.

Clive, the Mayor (who is a giant, by the way), and their lieutenants found shelter in a very small. contained office to the side where Big Decisions were being made. The Mayor, all ten feet of him, would emerge and bark at an aide, “I don’t understand, I thought you took care of this!” Maybe he thought that even Clive Davis could control the weather.

I asked an aide, Would this be a good time for me to ask the Mayor why there is nowhere to park anywhere in the city between the bike lanes, bike stands, turning lanes, and signs that say “Commercial Parking Only.” The aide narrowed his eyes and said, “Are you kidding?” (I was and wasn’t.) Another said, “Try it, See what happens.”

The Mayor wanted the concert to resume, even if it was just to tape an ending. Barry Manilow and Elvis Costello were said to be up for it. The Killers, however, required 30 minutes to prepare if this was going to happen. No order of show could be ascertained. And that’s when I bailed.

The show as presented, just over two hours, was magnificent. JP Saxe and Julia Michaels, Kane Brown, Journey, LL Cool J, Jon Batiste, Stephen Colbert, Polo G, a plucky Gayle King in an outstanding yellow dress, plus all the aforementioned acts– you couldn’t have asked for more. So we didn’t see Paul Simon or Bruce Springsteen, who lived around the corner and were wise enough not to come to the park. (You’ve seen them, we’ll see them again. ) Let’s be thankful for what we got. And thankful to Clive’s son, Doug Davis, the intrepid executive producer, who kept the trains running on time. He pulled off a miracle.

The whole production backstage was run so smoothly, no one wanted to go home. The people I abandoned may still be there now. The VIP tent — for people who contributed a lot to get seats, and the artists’ posse’s– was still in high gear as I passed them on the way out.

The staff was so helpful and friendly, from security to volunteers to minimally paid day workers who just wanted to be there. Wasn’t that what Welcome Home NYC was about? I met Diane, a 40ish grandmother who was working part-time at the stage entrance, told me she had three jobs but had to be there. I wound up having a sandwich and stale cookies with John Galanopoulos, the famous Times Square hot dog vendor who’d been invited on stage with Gayle King. I danced with Rob Thomas’s mother-in-law, who lost both of her 90ish year old parents this year, one to COVID. And Berkeley Reinhold, the lawyer for Lollapalooza, whose name I loved. And Alberto, who worked security with a huge smile even in blazing heat.

Was it worth it? Every single minute of it. But next time, I’ll bring an umbrella.

And Clive? As I left he was returning from meeting with Barry Manilow about possibly filming an ending. “Where are you going?” he said. “I’m leaving,” I explained, I was worried about my car.

“What? Now?” he declared in disbelief, ever hopeful, the ultimate rock and roll teenager. (Cue Southside Johnny’s “I don’t want to go home.”)

“You’re leaving us just when things are getting good!”

Or to quote Patti Smith and Bruce Springsteen: Because, the night.