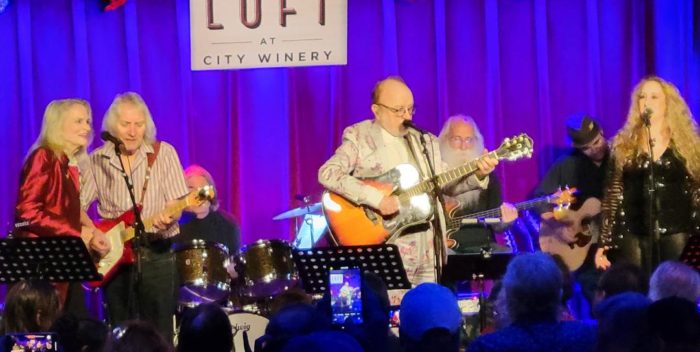 Can you get to New York’s City Winery tonight?  Vaxxed? Carded? Just wear a mask.

Last night, Peter Asher– of Peter & Gordon fame, of Apple Records fame, of Linda Ronstadt and James Taylor fame — brought a crack band and an enormously satisfying, intimate pop rock folk show to the Winery’s Upstairs Loft. They’re doing it again tonight. I wish I could get back there.

Peter’s been touring for a few years now, bringing back his and Gordon’s number 1 Paul McCartney hit from 1966, “A World Without Love,” as well as Del Shannon’s “I Go to Pieces,” plus “Lady Godiva” and a lot of other top 40 gems. Even without Gordon, Asher is the king of harmony, mixing in the Everly Brothers and Buddy Holly, groups he idolized, emulated, and later had Ronstadt and Taylor cover when he produced their parade of best selling albums.

Now, with Peter (bespectaced, bedazzling in a kind of Liberty of London flowered suit, the king of harmony) on tour, he’s got some other powerhouses of the era with him: Sister Kate– James’s charming beautiful sister, who had a hit album in 1971, looked around and decided  she did not want to be Carly, Carole, Joni, or Linda. And now, at age 71. she’s amazing, full throated, probably all the better for living her own life all these years. She’s Peter’s secret weapon on this tour, turning a little known James Taylor song from 1981– “I Will Follow Love” — into an unexpected hit.

Asher’s also got the great blues and rock guitarist Albert Lee, and famed bassist Leland Sklar (he played on every Carole, James, and and Carly hit, just for starters), plus Jeff Alan Ross, the multi-talented singer musician who has a connection to Badfinger– he was in a later version, toured as them, and performs socko versions of “No Matter What” and “Baby Blue.” A delight. Also on this bill, Steve Holley, a former member of Paul and Linda’s Wings whose credits include the hit version of “Coming Up.”

Did I mention spotting actress Amy Irving in the audience? And actors Christian Hoff and Clarke Thorell. And my old pal, Lynn Volkman.

Stevie and Maureen van Zandt, who were downstairs at City Winery supporting Darlene Love, came up to catch “A World Without Love.”