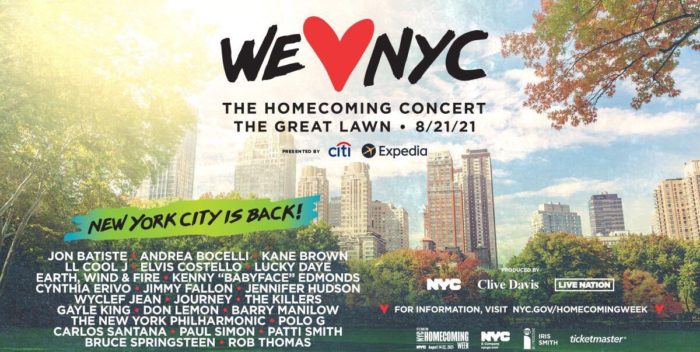 A bunch of new names have been added to the big Welcome Back show in Central Pakr curated by Clive Davis August 21st.

I already told you about Santana and Rob Thomas joining Bruce Springsteen, Paul Simon, and Jennifer Hudson, plus the Killers.

Having Cynthia Erivo along with JHud means there’s a chance we’ll see dueling Arethas as both singer-actresses are playing the Queen of Soul this year on screen. Erivo was the star of the Clive-produced “Genius” mini series, and Hudson opens August 13th in “Respect.”

The funny part is this is supposed to be a three hour show, but it’s starting to feel like an old fashioned five hour show. Once you bring the Philharmonic into it, and Earth Wind & Fire, well, then, this is an EVENT not just a concert. Who cares? What else were you going to do that day? It’s not like there’s a Broadway show that night!

I’m hearing that Elvis Costello will at least do “What’s So Funny About Peace Love and Understanding” and “Pump It Up.” But I hope he plays “Watching the Detectives” and a couple more. Patti Smith is scheduled for “Because the Night” with Bruce, but she better get a chance to “People Have the Power,” so appropriate for this show.

So bring a cooler, a pillow and blanket, plenty of sunscreen, and margharita mix. Clive has done it again!