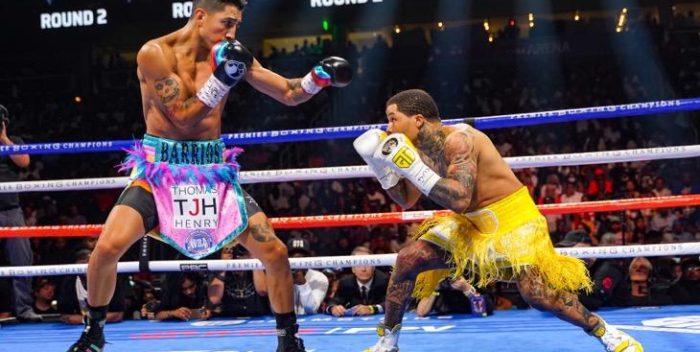 Gervonta “Tank” Davis, one of the biggest stars in all of boxing, put on a career-defining performance on SHOWTIME PPV from the sold-out, award-winning State Farm Arena in Atlanta, scoring a scintillating 11th round TKO over the previously undefeated Mario “El Azteca” Barrios to capture the WBA Super Lightweight Championship in the action-packed Premier Boxing Champions event. The main event was Barrios’ first fight under his partnership and sponsorship with Texas personal injury attorney and Philanthropist, Thomas J. Henry.

The glitz and glamour of Las Vegas was brought to Atlanta for the championship boxing match between Gervonta ‘Tank’ Davis and Mario ‘El Azteca’ Barrios. International Boxing Hall of Famer and promoter Floyd Mayweather adorned massive chains around his neck likely worth millions while coaching his protégé Davis from the side of the ring to ultimate victory. Thomas J. Henry and sponsor for San Antonio native Barrios pulled out all the stops for his fighter, splashing out half a million dollars on a private 737 plane to fly him and his family to Atlanta ahead of the fight.

During the grand entrances for both fighters, Barrios came out surrounded by Aztec dancers dressed in traditional garb as drums played ahead of the main event. Davis made his entrance alongside rapper Lil Baby as the arena of over 16,000 cheered. Notables at the star-studded fight included NBA legend Julius Irving, as well as NBA stars and podcast hosts for “All the Smoke,” Stephen Jackson and Matt Barnes. Other guests included Adrien Broner, and Lenny Walls.

The night before at the weigh-ins, Gervonta Davis and Mario Barrios came in just under the limit for their 140 lb fight. Davis (24-0, 23 KO) was at 139¾, with Barrios (26-0, 17 KO) at 139½. The height difference was obvious and apparent, and that’s something Tank had to deal with during the spectacular main event. Both looked in shape and ready to go, with Davis looking like he’s added some lean muscle for his first fight at junior welterweight.

While it was a thrilling back-and-forth fight, Davis won with a TKO in the 11th round. “I made it tough. I definitely could have made it easier but I went up two weight classes and I got the job done,” said the 26-year-old Baltimore native, who was headlining his second SHOWTIME PPV. “I hit him with some clean shots, but I’m the type of fighter that wants to catch you with clean shots. I don’t just want to throw any type of shot. The shots I was throwing were missing, but eventually I caught up with him.”

In a fight that lived up to its potential, Davis (25-0, 24 KOs) and Barrios (26-1, 17 KOs) combined to put on an unforgettable main event in front of a sold-out crowd of 16,570. After a slow opening four rounds in which Davis landed just 11 punches, the fight produced fireworks beginning in the fifth round. In the eighth round, “Tank” sent “El Azteca” to the canvas for both the first and second times of his career. First, Davis connected on a sweeping right hook that sent the former champion to the canvas. Moments later, a straight left hand by Davis dropped Barrios again. The brave Barrios rose to his feet, surviving Davis’ attempts to finish him in the eighth.

.@Gervontaa is a PROBLEM. Tank remains undefeated and becomes a 3-division world champ with a vicious body shot.#DavisBarrios pic.twitter.com/IbFSqeuSF7

With Floyd Mayweather encouraging Davis in his corner, the southpaw came out rejuvenated in the eleventh round, realizing that the fight could be close on the scorecards. “Tank” dropped Barrios for the third time in the fight, this time with a left uppercut to the body. The bloodied Barrios rose again, only to be greeted with another barrage of punches from Davis. Referee Thomas Taylor stepped in to stop the fight at 2:13 of the eleventh round.

“I knew for sure if I catch him, I’m crackin,” Davis told SHOWTIME’s Jim Gray. “So I caught him, and it showed. My coach was telling me to go to a jab style but I’m a southpaw so they know I’m going to that jab side. So I would try and bait him in. I faked like I was going left, and I threw my right. And my hook over top, and that’s where I caught him.”

In the final six-and-a-half rounds, Davis landed 85 punches. He landed 45 percent of his power punches (82/182), while Barrios more than held his own, out-landing Davis in six of the ten completed rounds.

“I knew he was hurt. I just had to catch him at the right time,” Davis continued. “Floyd [Mayweather] came to me and was honest and said I was down,” continued Davis, who was actually ahead on all three judges’ scorecards at the time of the stoppage. “So he said ‘Show me that you’re great.’ And you know how we do it in the doghouse, baby!”

With the victory, Davis now holds world championships in three different divisions simultaneously, a feat only accomplished by a few other fighters in history, including Henry Armstrong and Canelo Alvarez.

“He has the potential to be one of the greatest ever,” said Mayweather. “When I first met ‘Tank’ when he was 14 or 15 years old, I told him I’d make him a world champion. And that you’ll be one of the best someday. I’m proud of him.”

“I’ve never been a hater. Congrats to ‘Tank’,” said Barrios. “He came here and did his thing. It was nothing short of an exciting fight and that’s exactly what both of us predicted. He was the better man tonight, but I’ll definitely be back.

“’Tank’ is explosive. He caught me slipping and it’s boxing. At the end of the day, one punch can change the fight. That’s exactly what I felt happened. Congrats to him.”